In historic first, Pakistan rise to No. 1 in ICC Test rankings

In historic first, Pakistan rise to No. 1 in ICC Test rankings 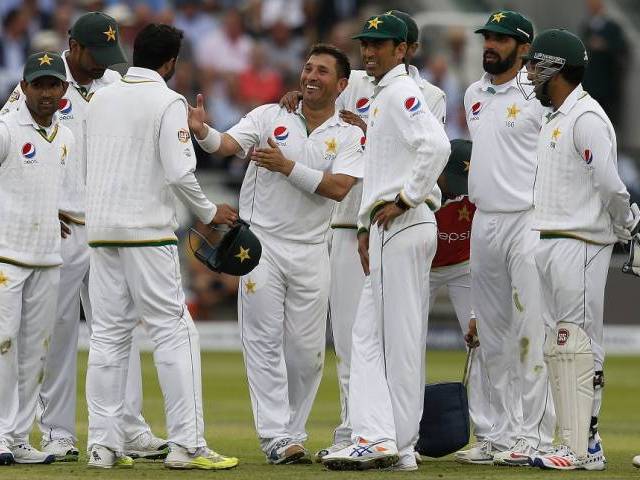 Pakistan, on Monday, rose to the number one position in the International Cricket Council’s (ICC) Test team rankings after the match between India and West Indies was drawn.

Pakistan are the fifth country after Australia, England, India and South Africa to become the number one team in Tests. Pakistan Test captain Misbah believes there is no greater feeling than becoming the number one Test team in the world.

“There is no greater feeling than to achieve the number-one ranking in the most traditional and purest format of the sport. This is what cricketers play for and want to achieve in their careers,” said Misbah as quoted by the ICC website.

“Number-one ranking is a reward for something we had planned as a group a few years ago and have worked extremely hard to achieve it. To top the Test table, which boasts some of the best sides and players, is something to be very proud of,” he added.

The 42-year-old captain also thanked everyone who helped them go on the top of the Test team rankings table.

“I want to compliment everyone who has been involved in the process, including all the players, the support personnel, the management, as well as our loyal fans and followers who remained committed to us and continued to back and support the side through the good and not-so-good days,” he said.

“For us, the number-one ranking is not a destination but part of a journey. Our long-term objective and strategy is to remain competitive, continue to challenge the top sides with good cricket and once again become the most followed side like the Pakistan teams of yesteryears. If we can achieve these on a consistent basis, then I am sure there will more laurels like this down the line.”

ICC chief executive David Richardson congratulated Pakistan on their rise to the status of the number one team in Tests.

“Misbah and his side deserve our heartiest congratulations,” he said according to the ICC website. “The number-one ranking is well deserved and a testament to the quality of cricket the team has consistently played over the past few years.”

“The past few weeks of Test cricket have been incredibly absorbing with some high-quality competitive series being played, exhibiting what is so special about Test cricket. The battle for the top ranking has made it even more exciting for all fans.”

Here is what cricket Twitterati is saying

Congratulations to Misbah, Test team & management on becoming ICC No:1 Test team. You guys deserve it, we all are proud of you.

Congrats Pakistan – the new No.1 Test team! This Aussie summer is going to be epic… #AUSvPAK pic.twitter.com/ZlIClWduiM

Thank you all for sticking by us thru thick and thin. Credit to the whole team for their hard work. Pakistan tops the table now! #No1

10 performances that helped Pakistan to the top