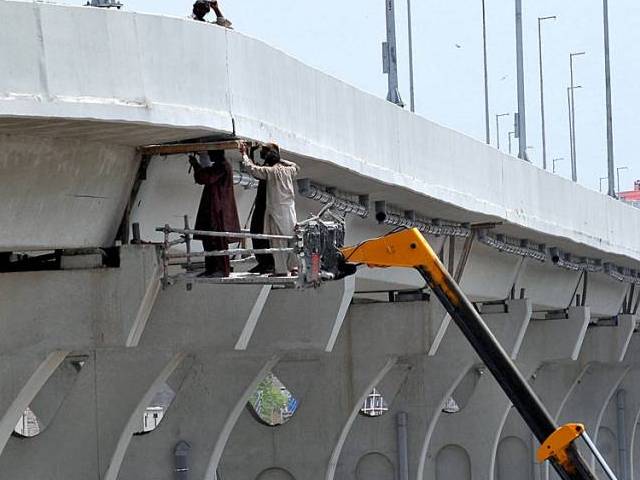 The project is part of the metro network in the city. It will connect Raiwind, Multan Road, McLeod Road, the city railway station and the Grand Trunk Road. PHOTO: APP

Talking to The Express Tribune, Khawaja Ahmad Hassaan, the OLMT project steering committee chairman, said: “We will take the matter to the Supreme Court of Pakistan. I do not want to comment on the LHC judgment, but we have several issues with it. We have the right to challenge the decision before the SC. It is a legal matter. The government will present its stance in the apex court.”

To a question, Hassaan said: “It is a public welfare project. Despite legal hiccups, we are committed to completing the project on time if not earlier.”

On Friday, the LHC had upheld an earlier order stopping construction near 11 heritage sites. The division bench, headed by Justice Abid Aziz Sheikh, had declared the NoCs issued by the Archaeology Department illegal and void. The court had reserved judgment on July 13 after counsel for both sides had completed their arguments.

Advocate Azhar Siddique, the counsel for the petitioners, had said that several historic buildings, including the Supreme Court Lahore Registry, the General Post Office, the Aiwan-i-Auqaf, Saint Andrews Church and Mauj Dariya shrine would be affected by the project construction. He had also objected to the large funds allocation for the project in relation to other development projects.

The World Heritage Committee of the UNESCO has expressed concern over the construction work in front of the Shalimar Gardens. The committee has recommended suspension of civil works around the site and asked the government to submit to the World Heritage Centre technical details, including the heritage impact assessment, for all projects that may affect the outstanding universal value of heritage monuments, prior to their approval.

More than 44 per cent of civil works on the OLMT project have been completed. Pillars meant to support of the elevated rail track have been erected except in areas where the court had issued stay orders. These were Shalimar Gardens, Budhu Ka Awa, Lakshmi Building, the General Post Office, the Supreme Court Registry Building, the Aiwan-i-Auqaf, Shah Chiragh Building, Saint Andrew’s Church, the Mauj Darya Shrine, Ghulabi Bagh, Chauburji and Zebunnisa’s Tomb. A 1.7 kilometre underground section near Anarkali is also nearing completion. The construction of metro stations is also in advanced stages.

The 27-kilometre Orange Line Metro Train project is estimated to cost $1.65 billion to the provincial government. It is being funded through a Chinese soft loan.

The project is part of the metro network in the city. It will connect Raiwind, Multan Road, McLeod Road, the city railway station and the Grand Trunk Road.

Falling short: Most security cameras at major hospitals out of order