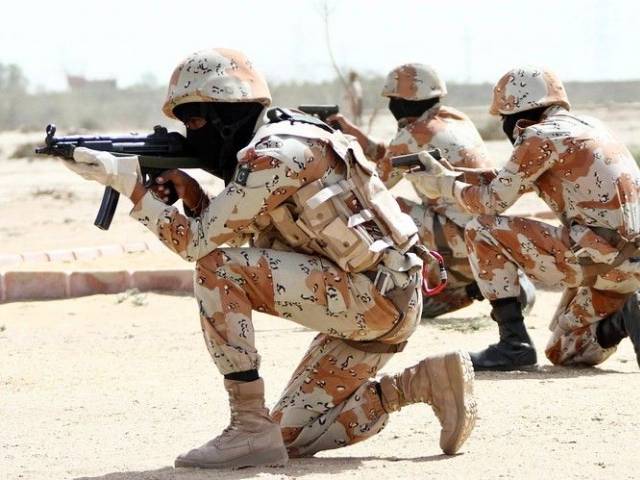 Legislators challenge the authenticity of the report endorsing the paramilitary’s operation. PHOTO: AFP

ISLAMABAD: The Senate Functional Committee on Human Rights on Tuesday questioned the veracity of a report Sindh Rangers’ had submitted as ‘proof’ of complying with human rights obligations in the Karachi operation.

Rangers had flaunted the report during the last meeting of the committee, claiming it to be prepared by the Sweden-based Human Rights Committee South Asia that endorsed the Rangers-led operation in Karachi and credited them with maintaining human rights standards.

PPP Senator Farhatullah Babar said: “The paramilitary force had allowed itself to be misled into taking refuge behind the report of an unknown human rights body that appeared to be fake.”

The senator said he had visited the website and found the names of Rahimullah Yousafzai as its Afghanistan correspondent and Hilal Usmani as its so-called correspondent in Sindh.

“Yousafzai had denied maintaining any links whatsoever with the said Human Rights Committee South Asia, let alone working as its Afghanistan correspondent as claimed in the website.”

While several emails sent at the address of Hilal Usmani bounced back as undelivered, he added.

“This clearly seems to be a fake organisation which has taken upon itself the task to whitewash human rights violations by law-enforcement agencies on a selective basis,” the senator said.

He said that the matter should be referred to the Ministry of IT and other investigation agencies to expose the elements behind it.

Babar said: “It was not merely an issue of misleading the Senate committee by flaunting the report of a fake organisation. The issue was that someone had misled the Rangers into a trap that had destroyed its credibility.”

According to the senator, neither will people believe in the Rangers’ claims of achieving peace in Karachi nor in their protestations of innocence on the issue of human rights.

“If for nothing else, at least for the sake of credibility of the military-dominated Rangers, the matter needs to be investigated,” the lawmaker remarked. The committee decided to refer the matter to investigation agencies.