The actres­s made headli­nes after she attend­ed an event in the US with Modi's face plaste­red all over her dress
By Entertainment Desk
Published: August 16, 2016
Tweet Email 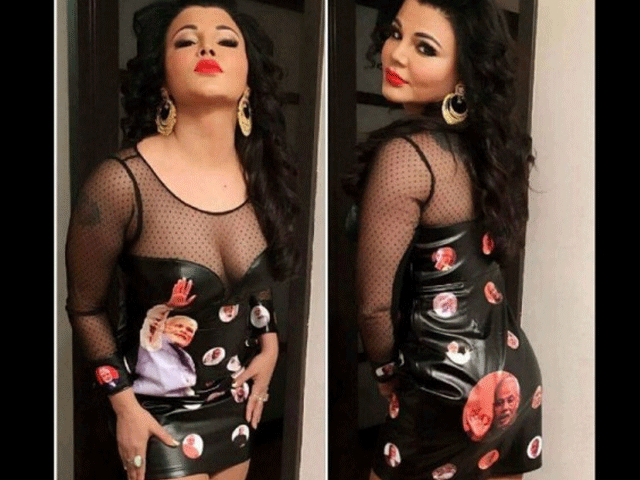 The actress made headlines after she attended an event in the US with Modi's face plastered all over her dress. PHOTO: IBTIMES

Controversial reality TV star and actress Rakhi Sawant knows how to stay in the news. Recently, she created quite a stir when she was seen sporting a fitted black dress with Indian Prime Minister Narendra Modi’s picture on it.

High for this: Diva and the drugs

Several Indians found her choice of attire to be disrespectful which prompted Rakhi to respond to them,

But, as can be expected of her, Rakhi’s response was somewhat unusual. The actress uploaded a video in which she not only expressed her love for the current ruling party BJP but also revealed that she had gotten her dress “approved” by the Prime Minister’s office.

“Modi ji jo hain, mere Hindustan ke Prime Minister hain. Aur jitna aap sab ko adhikar hai Modi ji par utna mera adhikaar hai [Modi is India’s Prime Minister and I have as much right over him as all of you do],” she says in the video.

Have television anchors become too powerful in India?

She also said since she’s in the US, she got the special dress made to represent India and ‘Indianso’ in the foreign country.

Check out her hilarious response:

‘Coke Studio’ is a turning point of my career: Naseebo Lal