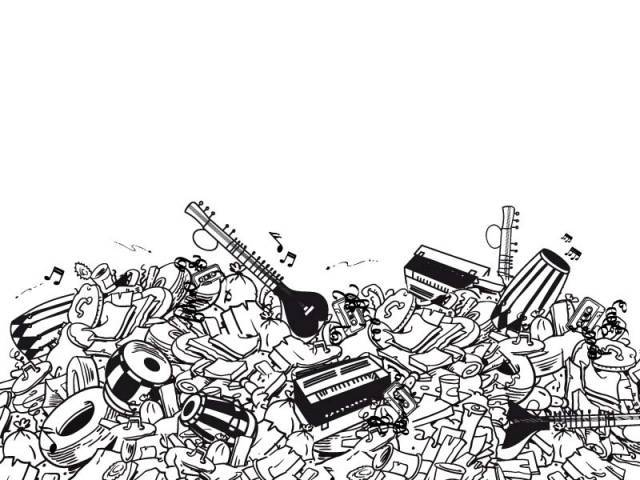 PESHAWAR: Almost every house in Khyber-Pakhtunkhwa—in rural and urban areas—buzzed and roared with Pashto music in the early 1970s. However, unfortunately, that entire era of original Pashto music is now rolling in the sands of forgotten times.

Pashto musicians started recording and distributing their music throughout the country through cassettes almost five decades ago. Soon after, cassettes had become a major source of music transmission in the country.

“Most of the big names in the industry today recorded their work through cassettes but unfortunately, this medium is almost dead now,” he said, adding the cassettes were part of the province’s history and needed preservation.

The emergence of compact disks and online music portals also caused the culture of tapes and cassettes to die a slow, painful death.

The latest music playing at full volume in each shop attracted many listeners and guided all those who were looking to buy some records in and around Qissa Khwani Bazaar and on Cinema Road in the city.

The name of the singer or the form of music a listener was searching for were adequate clues for shopkeepers selling cassettes in spaces grouped together.

Heaps and piles of cassettes neatly arranged in categories in these places lured even those who did not have a passion for music—various forms of poetry sung melodiously—ghazals, badalas and different folk songs were also recorded according to the demand of listeners.

Peshawar dominated the production of such tapes which were then distributed in shops scattered throughout towns and villages in the city.

The famous music centres of the era include Sangam music, Watan music, Sher Wali music, Odeon music and Mehran music. The first three centres that recorded and produced high quality music for generations, are no longer functional. Odeon and Mehran music centres have also stopped producing music but still own a huge stock of records. While there is slight joy in this news, it must be borne in mind that once the prevailing number is sold out, no new copy will ever be produced and that music record will be lost forever.

Speaking to The Express Tribune, Ansar Hayat of Sikandar music centre on Cinema Road said, “We have very little music on tapes and cassettes left from the glorious era.”

He said the company which used to produce cassettes has stopped manufacturing them due to lack of demand and almost all music has been shifted either to compact discs or on some online music forum. “Cassettes were popular till 2012 after which CDs, DVDs and now digital downloads killed the culture,” he said.

Hayat said earlier there was a large music library that represented the past but very few records exist in the present.

“A large part of what is lost was work produced and recorded by local artists who used to perform in village,” he said, adding their music was extremely popular among people.

He said people lack the enthusiasm to preserve records today and added he owned some master copies which were being converted digitally and provided only on demand.

Haji Shahid who runs Odeon music centre, the oldest music recording centre of the province, has copies of almost all music records but fears they will soon be destroyed if they are not preserved. Although he has not written dates on the copies, they still reveal a lot about the past.

The need to preserve

“Our entire music industry spread and developed through cassettes, but Pukhtuns have little interest in their past,” Layaq told The Express Tribune. He said almost 99% of the work of ghazal legend Khyal Muhammad is in cassettes. “The work of other legends like Kishwar Sultan, Gulnar Begum, Rafiq Shinari, Hidayatullah, late Zarshad Ustad, famous folk singer Habib Noor, Wahid Gul Ustad, Farzana who relinquished music when she was at the top of her career, Sardar Ali Takkar, Gulzar Alam, Qamar Gula, Gul Meena, Wagma, Naghma and southern district artists from Said Ahsan to Rasool Bacha are all in cassettes.”

Layaq said it was the duty of the culture department to take master copies and convert them into modern forms of accessible music. He said the music of the past era was historic and needed preservation in the form of a library for future research. Directorate of Culture Director Abdul Basit told The Express Tribune they have started a new project for conserving culture which includes collecting old music and film records. “However, the project is in its initial stages and was always subject to availability of funds,” he added.

Pashto musicians first recorded their music through recording discs in 1930s. Soon after, spool recorders which could record six songs on one side and six on other side took over. However, the device was not easily accessible to the public and did not thrive.

When cassettes emerged, the entire scenario of music change – a new epoch of Pashto music started to take shape where local artists began recording their work and people began to buy them excessively. Soon every house in the city and the province owned tape recorders that gave a huge boost to the music industry.

Woman raped ‘by lover’ in Abbottabad