His remark­s came during trip to Majhoi in Azad Kashmi­r where he began field visits to review progre­ss on mega projec­ts
By Sardar Sikander / Sehrish Wasif
Published: August 13, 2016
Tweet Email 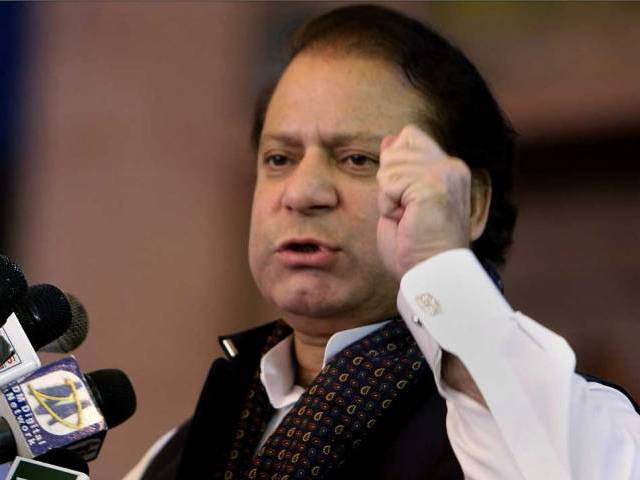 His remarks came during trip to Majhoi in Azad Kashmir where he began field visits to review progress on mega projects. PHOTO: AFP

ISLAMABAD: Prime Minister Nawaz Sharif has vowed to complete all ongoing power projects in his tenure in a bid to rid the country of frequent power outages and boost industrial growth.

His remarks came during a trip to Majhoi in Azad Kashmir where he began field visits to review progress on mega projects prioritised in an ambitious two-year development plan launched by the government a fortnight ago.

Announced on July 29, the development plan envisions speedy execution of megaprojects in the remaining tenure of the PML-N.

On Friday, PM flew off to Azad Kashmir to review ongoing work at the Neelum-Jhelum hydroelectric power plant and ordered that the project be completed by June next year.

PM’s visit to the project site followed an important meeting of the federal functionaries at the PM House. The huddle was attended by Finance Minister Ishaq Dar, Water and Power Minister Khawaja Asif and PM’s Political Adviser Asif Kirmani.

Following a detailed briefing on the project, PM Nawaz ordered the officers to accelerate the construction work. “We will do our best to fulfil the promises made to the nation, and to end load-shedding in the country,” he was quoted as saying in a statement issued by the PM House.

He also directed the authorities to give preference to locals in jobs at the hydropower project, launched in 2008.

“Who would be more worried than me about ridding the nation of the menace of load shedding?” an unusually candid statement quoted the PM as saying during the visit to the hydropower project site.

Power project under CPEC runs aground

WAPDA chairman informed the PM that more than 85% of the work had been completed.

The project envisages diversion of Neelum waters through tunnels at Nauseri about 41km upstream of Muzaffarabad and draining the waters in Jhelum River at Chatter Kalas in AJK, where the powerhouse will be located.

Credible information available with The Express Tribune suggests the other power projects prioritised by the PML-N government include the Dasu dam, Bunji dam and the long-term Diamer-Bhasha dam.

Construction of airports in Bannu and DI Khan and work on the New Islamabad International Airport in Fateh Jhang will also be undertaken.

He is also scheduled to perform the groundbreaking of Shorkot-Khanewal section of M-4 Motorway today (Saturday).

The 240-km highway between Faisalabad and Multan will help boost trade and ease travelling while reducing transportation costs. NHA spokesman Kashif Zaman told The Express Tribune the Rs22-billion highway project was divided into two sections: 31km from Shorkot to Dinpur and 34km from Dinpur to Khanewal. The project will be completed within two years.

Sahiwal power plant will be operational next year, says CM

War of petitions: Not to be outdone, PTI fires own response