For the love of art

For the love of art

The launch of the Google Art projec­t has transf­ormed the doors of 17 museum­s includ­ing the Nation­al Galler­y in London.
By AFP
Published: February 7, 2011
Tweet Email 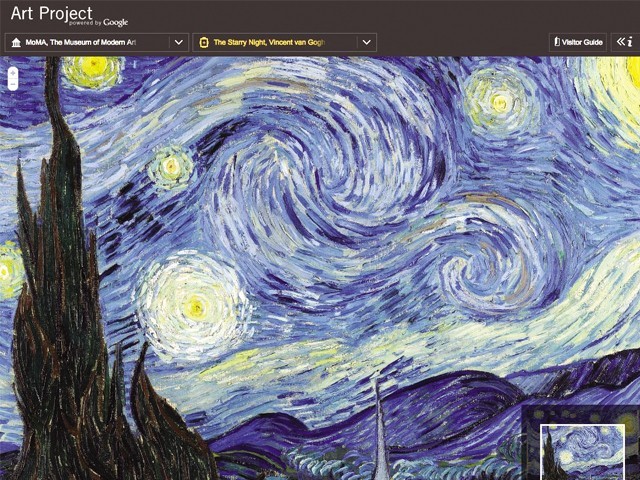 LONDON: The world’s greatest museums are increasingly using the Internet and social networking sites to pique the interest of people who might never think of setting foot in an art exhibition otherwise. At a click of a button, some of the greatest galleries in the world can come to life in a way that has hitherto been near-impossible when seen with the naked eye.

The launch of the Google Art project has taken cameras used in Street View site and transformed the doors of 17 museums including the National Gallery in London ­— becoming the latest move on the Internet.

The State Hermitage in Saint Petersburg, Amsterdam’s Rijksmuseum and another London heavyweight, Tate Britain, are among the institutions whose artwork has been selected for display in incredible detail. But all the museums featured already have their own websites, so why marry up with the US online giant?

“We have to seek out the Internet user, on social networks, the networking sites, wherever they may be,” said Laurent Gaveau, in charge of new media for the Palace of Versailles, the only French museum taking part in the Google project. Google can offer the technological muscle required for this project,”The use of gigapixels is really new,” Gaveau said, referring to the high-resolution system used for capturing the paintings.

Charlotte Sexton from Britain’s National Gallery said museums were convinced that the Google site — far from harming the traffic to their own websites  — could actually capture a new audience and even persuade people to come to the museums. “There is plenty of evidence that shows that by engaging with relevant content online it actually can be a driver to encourage people to go and see the real thing — you can’t underestimate the thrill of the original,” she said. “And for many they may never be able to visit physically but they can have a meaningful virtual experience.”

Larissa Korabelnikova, spokeswoman for the Hermitage, agrees. “There is no conflict between virtual visits to the museum and real visits,” she said. “One adds to the other.” But not all museums are convinced about Google Art. The Louvre in Paris, a true giant of world culture and home to Leonardo da Vinci’s Mona Lisa, spurned Google’s advances and chose instead to build up its own website, which currently receives 11 million visits a year, compared to 8.5 million visitors in the flesh. The Palace of Versailles says the benefits of moving online have been huge. In three years, its decision to embrace Facebook, YouTube and Twitter has seen more and more users directed towards its own website, which now counts six million a year.

Bold pieces of art on display at Rohtas