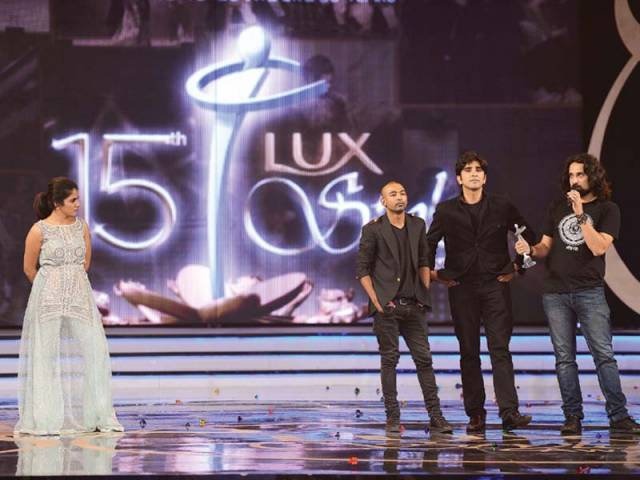 KARACHI: Sitting amid all that glitters in the Pakistani entertainment industry, it was difficult to fight the idea that we may continue to rave about how the game is finally changing for Pakistani music, things on ground are pretty much the same.

It is a convincing argument to make that music and musicians did not receive the best of treatments at the show. Almost all of our revered stars were absent. There were no live, unplugged or recorded performances of music other than Ali Zafar’s somewhat uplifting opening act and a short Amjad Sabri tribute; the former brought back memories of the Ali Zafar of yesteryears. With a less diverse music scene than ours, even shows across the border have now begun to let their singers and music directors take centre stage.

One must not forget that Lux Style Awards is the same platform that has in the past laurelled Ayesha Omar and Zoe Viccaji for their ‘unmatched’ musical prowess. For the most part, however, we do not blame the organisers this time around. There wasn’t much that they could do.

While awards do become a source of recognition for those who toil all year round, puritans would say they do not mean much. Perhaps this is why awards are never considered a yardstick for success; there’s truth to the criticism that all that these shows do is inconvenience the chosen few so that they can be garlanded for the umpteenth time.

This was felt the strongest when the Song of the Year was announced. While Ali Zafar’s Rockstar was certainly worth appreciating, Asrar, Khumariyaan and Javed Bashir were clearly robbed.

Best Music Video Director Award was rightfully handed to Salman Noorani for Mooroo’s Mariam. The 2,600-still stop motion film was nothing short of a triumph of imagination and it was heartening to see Noorani’s efforts recognised. Make what you want of it: all other nominees were the musicians themselves, who had put their videos together. The Jamis, Babar Sheikhs, Sohail Javeds and Saqib Maliks have already moved to better things.

Rahat Fateh Ali Khan and Abida Parveen were declared best singers of film music and both were not present to receive their awards. Her song may have been so-so but Parveen is a woman who has a different skill set, objectives and priorities. In front of her, you hardly stand a chance. Khan, on the other hand, may have stolen Bashir’s limelight; he will not be able to hog it for long. We would not have complained had Bashir and Meesha Shafi bagged these trophies for Talabgaar and Eva, respectively. To reiterate, Moor’s soundtrack is heavily underappreciated.

While we were secretly hoping for SomeWhatSuper to seal the deal, Zeerak Ahmed’s Slow Spin won the Best Emerging Talent award and we are not complaining.

Rockers Ali Noor, Ali Hamza and Kami Paul were seated in a corner, safe from all the comedy that for the most part was funny. When Noor made a speech after winning the Best Album award for Begum Gul Bakaoli Sarfarosh, he said what Faraz said in fewer words: zabt lazim hai magar dukh hai qayamat ka Faraz. “This award goes out to all the people who made albums this year … and all the people who should make albums.” We hope someone, somewhere took note.

Given the diverse sound that the other nominees had on offer, we’d say that Noori did not win. The others lost.

Main takeaway from the night: the performers danced to Pakistani tunes only and in the process, reinvented many of them.

Engineer with no practical experience? NED now offers a solution