For God and the godless: Nahid Raza brings out loving attributes of God in art

For God and the godless: Nahid Raza brings out loving attributes of God in art

She uses the letter, 'Alif', as a symbol of Allah that she repeat­s throug­hout her work
By Our Correspondent
Published: July 27, 2016
Tweet Email 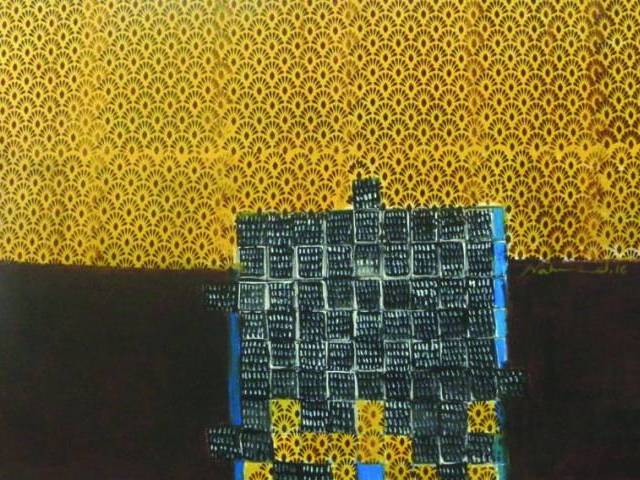 The works revolve around the attributes of God, ranging from omnipotence and love to paradoxes and solitude. PHOTOS: COURTESY CANVAS GALLERY

KAARACHI: The recent show of artist Nahid Raza’s works at Canvas gallery, titled ‘Virdh’, reminds you of the overwhelming feeling of the presence of God within and outside us. At the show, one feels surrounded by immense love and overpowering positive energy. The works revolve around the attributes of God, ranging from omnipotence and love to paradoxes and solitude. The word ‘virdh’ refers to repetition of a certain incantation – a practice that exists in many religions – which Raza has employed in her works through repetition of Islamic motifs and the letter, Alif. At the show, Rahat Fateh Ali Khan’s rendition of Ghalib’s ghazal Dil se teri nigah jigar tak utar gai added to the trance-like experience.

According to Raza’s artist statement, the work is ‘based on spirituality, meditation and Sufism’ as is evident in her acrylic-on-canvas paintings. The pattern of the works appears to be similar – the backgrounds depict repetitive Islamic motifs, while the centre is a cluster of the Arabic alphabet, Alif, in squares.

While the backgrounds are silkscreen prints, the clusters of Alifs have been painted in acrylic by the artist. With a touch of abstract, the artist has beautifully employed the Alifs as symbols of God. In almost all the works, the clusters of the alphabet are found in the centre, with other Islamic motifs, which are repetitive, surrounding it. “When you’re looking at the painting, you will feel that you are lost,” said Raza, while speaking to The Express Tribune. “The painting just attracts you.” She believes that her works are very personal and she has shared them with others and allowed them to interpret them according to their own perspectives. When a visitor remarked that this is a malang-type art, Raza said that this is something that you can’t explain and can only feel.

“Paintings are very personal and the feeling that you deliver through your work is derived from the artist’s emotions,” said Raza. “If you are lost [in the trance] of something and you paint it, the painting will convey that feeling of being lost.” According to her, a feeling is a feeling, whether it is for God, humans or your own self. She shared how she recites virdh of Ya Allah, Ya Rehman, Ya Raheem and Durood Sharif every evening and gets totally lost in the virdh as it is so personal. “I feel this immense love for God while reciting it and I feel that I should paint this feeling,” she explained. “When you look at my works, you will have your own set of feelings that you can relate with my work.”

The business deal that cost a life