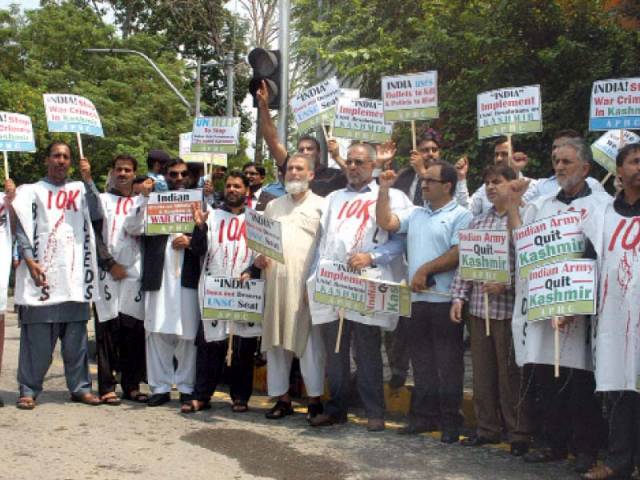 ISLAMABAD: The All Parties Hurriyat Conference (APHC) Azad Jammu and Kashmir chapter on Monday staged a protest demonstration outside the Indian High Commission against killings of civilians in Indian controlled Kashmir.

The participants were holding placards and banners inscribed with anti-India and pro-freedom slogans.

APHC leaders including Ghulam Muhammad Safi, Farooq Rehmani, Syed Yousuf Naseem and others said that the Indian security forces were using lethal weapons and fatal pellets to put down an indigenous uprising against its rule but the world powers were playing a role of a silent spectator.

They said that the India army was blatantly committing human rights violations in the valley and no one was stopping it from the excesses.

They said that the Indian army has committed genocide by killing over 50 civilians in less than two weeks. The speakers said that Kashmiris wanted self-determination and complete freedom from Indian.

The participants urged the United Nations and world powers to take notice of human rights violations in Indian controlled Kashmir and ask India to settle the Kashmir issue according to the UN resolutions and wishes of the Kashmiri people.

The speakers also hit out at the statement of Indian External Affairs Minister Sushma Swaraj stating that Kashmiris have the sole right to decide about their future.