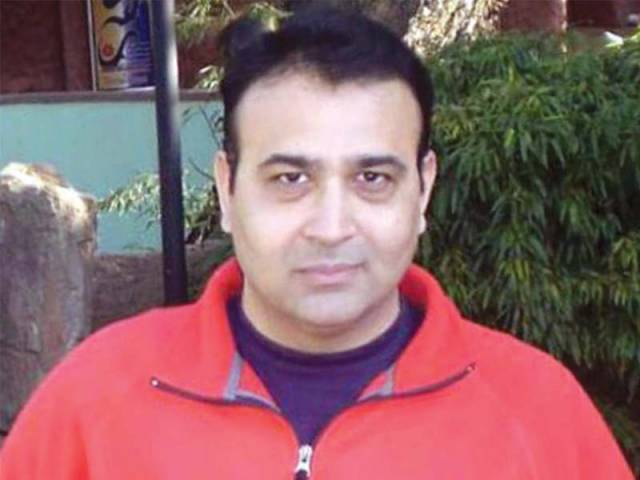 ISLAMABAD: Capital’s top cop on Sunday took to the social media to blame “vested interests” and “conspirators” after the death of an SSP at his room at the police headquarters here on Friday.

Asher Hameed, who was a senior SSP and was serving as assistant inspector general (operations) in Islamabad Police until a few weeks before his death, was found dead in his residential room on Friday afternoon.

He was found lying face down on the floor and bleeding from the mouth.

Officials said that initial examination of the body and the room found no evidence to suggest that the death was unnatural.

A post-mortem of the body was performed at the Pakistan Institute of Medical Sciences (Pims) to ascertain the cause of death the same day.

Shaheed Zulfiqar Ali Bhutto Medical University Vice-Chancellor Dr Javed Akram told The Express Tribune that externally there was no mark on the body.

He, however, said that a chemical examination of the samples at a laboratory would reveal the real cause of death.

On Sunday, Inspector General (IG) Tariq Masood Yasin posted on Facebook that there were some elements who had exploited the event for their vested interest.

“Soon I will share the details and show the real faces who took this incident for their vested interests to deprive the citizens of the fruits of reforms that are being introduced in the ICT Police on a very fast pace,” Yasin wrote in the post, which was shared from Lahore and taken down a few hours later.

“I know all conspirators will vanish and it will be Inshallah only me who will look after his [Hameed’s] family till I am alive … nobody knows the plight of his family more than me,” said the IG in the post.

Inspector Tahir Khan, spokesperson for the IG, said the post was a response and a reaction to some media reports that blamed the IG for Hameed’s death.

Some media reports had suggested that Yasin transferred Hameed and put him under stress due to his [IG’s] personal preferences.

Hameed had been transferred to Balochistan Police by the Establishment Division a few weeks ago but had not moved there yet, and was trying to either get the transfer cancelled or get transferred to Punjab.

Khan said Hameed’s transfer was a routine and professional matter and had nothing to do with personal preference of any officer.

Asked who the IG hinted at being against reforms, Khan said the IG had to face resistance for projects such as the Safe City Project, which has been made fully functional only recently. He said the IG had good relations with Hameed and his family.

“His family is one of our close relatives and his father-in-law is an old friend. It was indeed one of the most shocking and painful events of my life,” the IG said in the Facebook post.

The post said that Hameed had suffered a heart attack in the past and had gotten a stent implanted, and that both Hameed’s father and younger brother died of heart failure.

With a family history of heart disease, most officials had suspected it to be also the reason for Hameed’s death.

Police said during examination of the room, they found nothing suspicious and believe that Hameed died of natural causes.

However, they said nothing could be said with certainty before a final post-mortem report.