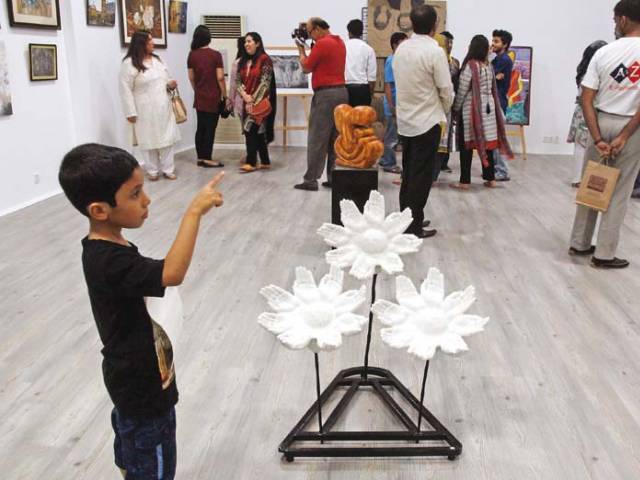 The exhibition seeks to promote the works of young artists and give them a chance to showcase their talent while still studying. PHOTOS: ATHAR KHAN/EXPRESS

KARACHI: Young artists are barely given the chance to showcase their works when still in university however Alliance Française de Karachi opened its doors to promote emerging artists on Saturday evening.

The event, titled ‘The Undergraduate Art Affair: A survey exhibition of emergent artists of Pakistan’, features the paintings, sculptures and drawings of over 70 undergraduate students from 18 art schools across Pakistan.

The project was the brainchild of three young interns at Alliance Française, Mariam Khan, Zainab Sheikhbhoy and Zainab Abdul Hassain, who are studying fine arts at Indus Valley School of Art and Architecture (IVS).

Speaking about the project, Sheikhbhoy said “A lot of Karachi-based young artists do not get the opportunity to showcase their works because they are still in art schools.” However, the idea was to provide them with a platform so that they can show their talent to others, she added.

“We ourselves felt very encouraged after this platform as we are also showcasing our collection,” remarked Khan. The exhibition was inaugurated by French consul-general in Karachi François Dall’Orso on Saturday. Speaking to The Express Tribune, he remarked that he has pledged to promote arts in the country. “This is the first initiative where the works of young artists from diverse backgrounds are being showcased collectively,” he said, adding that the exhibition also features the works of artists from Multan and Rawalpindi.

The exhibition brings out diverse themes with images of trees, landscapes, skulls, Darvesh, iconic monuments such as Badshahi Mosque, pop culture icons such as Walter White and sculpted flowers with hands as petals.

Noor Butt of IVS took inspiration from the ‘concrete jungle’ in Pakistan. Her work titled ‘Boxed In’ depicts how presence of buildings influences peoples’ lives. “[It’s about] how we are controlled by them towering above [our heads],” she claimed. Khadija Amin of IVS, in her painting, used acrylics to depict a whale. “What is an ocean without a whale in it?” she remarked while speaking about her work.

Recycled bottles were used by Soveyba Tayyab for her work titled ‘Upcycle Bottles’. “I hope we recycle these and use them,” she said. Tayyab is a student of University of Karachi.

The show will continue till August 1.