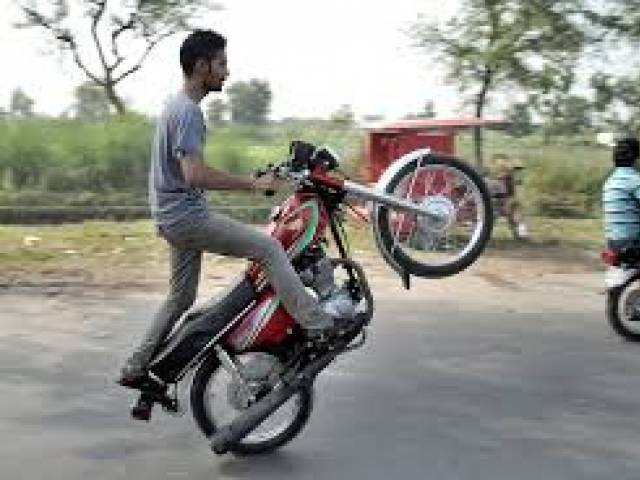 SUKKUR: Despite orders of the Sindh inspector general, the local police have failed to control wheelies and underage driving of motorcycles and rickshaws, claim residents.

A number of residents who are frequently irked by these menaces claim that since the posting of Amjad Ahmed Shaikh as Sukkur SSP a couple of months ago, the law and order situation in the district has become worse.

On the first day of Eid, 16 youngsters received severe injuries while doing wheelies but the police is yet to reprimand them. Moreover, since the advent of CNG rickshaws, a large number of minor boys are seen driving these vehicles in the city but the authorities are not taking any action against them.

Imran Ali, a 14-year-old rickshaw driver, told The Express Tribune that he has been driving this rickshaw for the last year. “Many times policemen used to stop me and ask me about my licence and other documents but then they would settle the matter for Rs20 to Rs50,” he said.

My father used to drive a rickshaw and after his death I am driving it, he explained, adding that “I have to support my family therefore I will continue to do this regardless of any illegality.”

Interestingly, according to reports, several days ahead of Eid, police started a campaign against minor drivers and detained more than 100 kids and seized their motorcycles and rickshaws. However, they were all released and their vehicles given back to them on their elders’ assurance that they would not do so next time but it is evident that they have not kept their word.

Sukkur Development Alliance president Jawed Memon, expressing his anxiety over the abundance of underage drivers and the police’s failure to control them, said “children aged between 10 to 15 years are driving motorcycles and rickshaws, which is not only dangerous for them but also for others.”

Since the repair of main roads of the city, drivers, especially minor ones, are seen speeding, he said, adding that Jinnah Chowk connecting to Bunder Road is the most dangerous as the drivers enter the road at full speed which frequently results in accidents.

“I met with the deputy commissioner recently and requested him to construct speed breakers at Jinnah Chowk but he has yet to do anything about it,” he explained.

SSP Shaikh could not be reached for comments despite several attempts. An official at the SSP office, requesting anonymity, said the ‘boss’ seldom gives comments to print journalists and instead prefers to respond to queries from members of the electronic media.