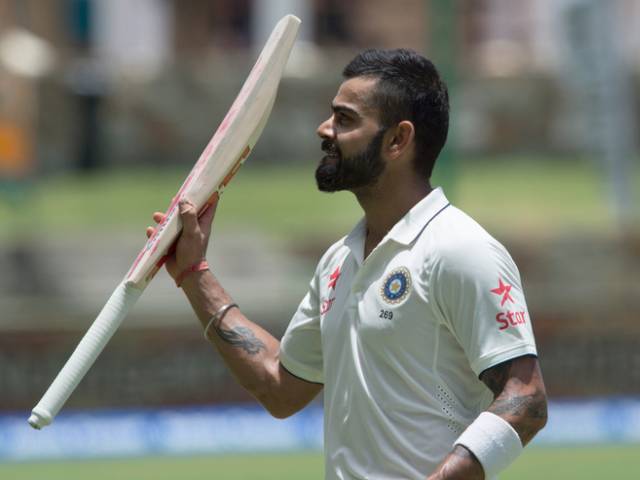 Virat Kohli made history with his first double century as India built a seemingly unassailable lead, 404 for four in their first innings at lunch on the second day of the first test against West Indies in Antigua on Friday.

Captain Kohli became the first man from India to compile a test double century overseas when he pulled a single to deep mid-wicket just before the break in North Sound.

Many Congratulations @imVkohli on scoring his 1st double hundred in Test Cricket. many more to come. #TeamIndia #whatatalent @BCCI #WIvIND

Kohli lowered himself to his knees and kissed the turf as retired batting great Viv Richards, after whom the stadium is named, joined in the applause from the stands.

PCB to offer foreign cricketers $20,000 each to play PSL final in Lahore

Kohli was 200 not out off 281 balls at lunch, with Ravichandran Ashwin on 64 as the pair added 102 without loss in the opening session.

West Indies took the new ball immediately at the start of play, but pacemen Jason Holder and Shannon Gabriel could not get the much-needed breakthrough.

By time lunch arrived the test was virtually out of reach for the home team, who perhaps paid the price for loading up their line-up with batsmen, thus reducing the bowling options available to captain Holder.

The match is the first of four tests between the teams in the Caribbean.