‘What if you were transgender?’

‘What if you were transgender?’ 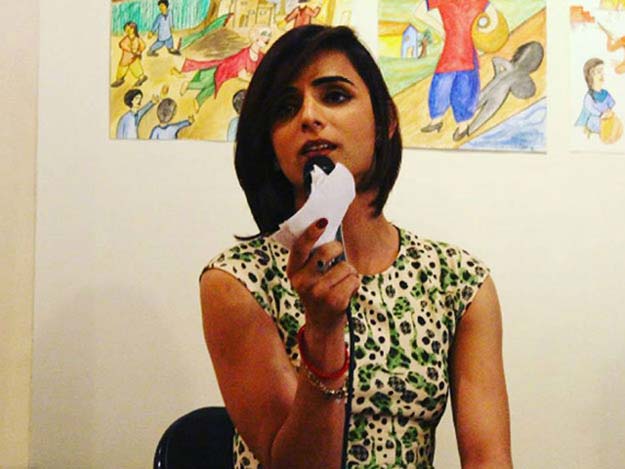 Kami Sid opens up about her self-discovery, elaborating on trans issues in a conservative society like Pakistan's

KARACHI: He was still in his teens when he realised there was something fundamentally different, almost peculiar, about his existence. He often thought he was mentally challenged and would never be able to cope.

And then one day, he made up his mind. He was gay. But that was to only provide fleeting relief. A ‘ghost’, or the painful reality so far unknown to him, kept haunting him, pressing him to find, discover it. He tried, struggled maniacally before finally learning the truth: he was neither a boy, nor a girl.

The word “she” described him best. She was transgender woman. Her journey from being a boy to becoming a girl was replete with painstaking steps taken to discover her “self”.

Kami Sid – regarded as the future Laxmi Narain Tripathi, a veteran transgender rights activist from India – now wields the torch of the struggle for equality for the transgender community in a highly intolerant society.

“There are a myriad of people I know who do not belong to either male or female gender, but are forced to live a lie,” Kami had remarked during a session on transgender rights at the Karachi Literature Festival this year. Talking to The Express Tribune, Kami shares her experiences and opens up about self-discovery and the importance of shedding a light on issues of the transgender community in a conservative society. “When I reached the age of puberty, I realised there were other people like me. Until then, I would always think I was mentally challenged. Fortunately, I met a person from the community who enlightened me,” she recounts.

Kami then visited a number of countries, including Denmark and Thailand, where she met people like her. If it was not for the efforts of NAZ Pakistan and AKS – organisations working on issues related to the transgender community – Kami would have not explored her being. “It took me five years to recognise my own being and know that I was not alone in this world.”

Identity and the third gender

The fearless activist also laments the paucity of counsel afforded to individuals on sexual orientation and sex identification. She shared that psychologists – or even psychiatrists – do not guide young men or women when it comes to embracing their sexual orientation identity. “I see a woman in a lot of men. They are remarkably effeminate, something they might never whole-heartedly accept. Many are born transgender but never know as society considers such issues taboo and not worth discussing,” Kami says.

Kami’s community is small, consisting of people who do not always have proper education or a respected job. She blames this on the fact that many young men and women lack the courage to identify themselves with the third gender. “In Pakistan, we are least concerned about issues pertaining to sexual orientation and identity. No one here knows about a subject called Sexual Orientation, Gender Identity and Express (SOGIE), which I think is a must for a society to address the plight of marginalised genders,” Kami says. “We have to understand that by just mentioning the third gender identity on your CNIC, the state has not done enough. It is not enough that the government has fixed a two per cent job quota either. No! It’s a protracted fight that we have to continue to get equal opportunities,” she says.

“We see things are altogether different in India because the state is very serious about resolving matters affecting the transgender community,” Kami observes while elaborating on the government’s role in paving the way for all-gender equality. “State support might bring many transgender individuals out of the closet,” she says. The Indian state’s stance vis-à-vis transgender rights is seemingly different from Pakistan because Hindu scriptures clearly acknowledge their existence as a separate gender. However, Kami believes Islam also affords them rights and acknowledges their existence.

Speaking on the matter, Tahir Ashrafi, a Council of Islamic Ideology (CII) member, says, “Transgender individuals are the most oppressed segment of our society. Great care should be taken to treat them. Also, immense effort should go into giving them their rights.”

He is of the opinion that transgender individuals have a special place in Islam, accorded special rights and privileges during the time of Hazrat Umer (RA). A precedent, Tahir believes, Pakistan ought to emulate.

Hinduism also acknowledges the existence of the third gender and asks believers to respect them, Pandit Mukesh Mahraj P Jadia says. “Transgender individuals are often invited to celebrations as their prayers are highly regarded,” he says. Pandit further shares how transgender individuals mentioned in Hindu scriptures are especially revered. When asked what if someone feels they don’t belong to either gender and are grappling with an identity crisis, Kami says in the digital age, this should be no cause for concern. A plethora of information—available on the internet—can help one understand what they experience and alleviate the pain that accompanies the confusion, she says.

No practical rights for the transgender in Pakistan

“If one starts feeling uncomfortable in their body, they should seek knowledge of their own accord or contact pertinent people from the transgender community,” Kami says. She recalls how dramatically her life changed when she came to terms with her identity and travelled across the world. “I must say that I am at peace now. I think every single person is entitled to the feeling. There should be no qualms in embracing your identity in this day and age,” Kami says. The fight for “true equality” continues. “It is good to see that people have finally started listening to our problems, KLF 2016 is but one example,” Kami observes.

In the years to come, I wish for no transgender individual to remain in the closet. I hope future circumstances allow them to easily identify themselves, she concludes, envisioning a more humane and democratic future for her community. Only Kashmiris can decide their future: Sartaj Aziz