After Wani, Kashmir on the edge-II

After Wani, Kashmir on the edge-II

What was seen in the afterm­ath of Burhan’s killin­g is the outpou­r of pent up emotio­ns that have been bubbli­ng inside­
By Shujaat Bukhari
Published: July 14, 2016
Tweet Email 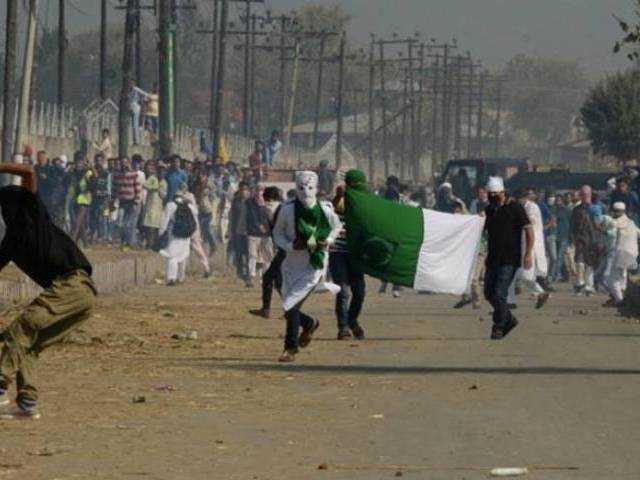 What was seen in the aftermath of Burhan’s killing is the outpour of pent up emotions that have been bubbling inside. PHOTO: AFP

SRINAGAR: Afzal Guru was at the lowest number on the death row list, but he was picked up by the ruling Congress apparently to stop Narendra Modi from reaching Delhi, though that did not happen.

The hanging opened a new door for the Kashmiri youth to return to what they had left in the mid-90s. Not that Kashmiri boys were part of the militancy that flourished under the command of foreigners, their participation was low. Coupled with the new wave of intolerance across India, Kashmiri youth started feeling more insecure and their vulnerability due to the absence of employment opportunities created more space for the violent route.

However, when a bunch of educated youth turned to militancy, it set a new standard in the path Kashmiris had abandoned long ago to pave way for the peaceful resolution of the political issue. Their participation in the militancy changed its dynamics and people started attending their funerals in large numbers.

They not only endorsed the participation of local boys in the violence but also rallied behind foreigners. When Abu Qasim, a commander of Lashkar-e-Taiba, was killed in early 2016, his funeral was attended by over 30,000 people.

All Kashmiris might not have participated in militancy but the support they have been demonstrating tells about the Kashmir story that is akin to what happened in the early 1990s when a large number of Kashmiri youth picked up the gun and were sheltered in every home.

As in any other conflict, there are many layers of reality in Kashmir. People seeking employment and taking part in elections to elect a government are part of that. But the deep sense of anger against the state is the manifestation of people’s urge to see the resolution of Kashmir issue.

From 2003 to 2008, when India and Pakistan were involved in a productive peace process, the people wholeheartedly supported the process as they believed that it was meant for finding some solution.

But after the 2008 Mumbai attack, there has not only been complete absence of political engagement but also a denial that there is any issue called Kashmir.

And what was seen in the aftermath of Burhan’s killing is the outpouring of the pent up emotions that have been bubbling inside. The funeral was unprecedented with an estimated 200,000 people taking part in it.

If a senior police officer who has been in the forefront of the counter insurgency is to be believed, Burhan did not take part in any action. “The truth is, despite all his ‘virtual’ bravado, despite being a poster boy, he could not carry out a single action against security forces,” the officer wrote on his Facebook page.

But then how he was immortalised as a new icon of Kashmir resistance?

Burhan represented the new generation of Kashmiris and he used the social media to attract people. The difference between him and the militants of the 90s was that he did not hide behind a mask nor he used any alias. He would circulate a video that would go viral. Police officers admit Burhan became an inspiration for ‘some’. He redefined the militancy in Kashmir and brought back its indigenous colour.

Pakistan may be accused by India of promoting of violence in Kashmir, but the way tens of thousands of people have rallied behind a militant commander, leading to the death of almost three dozen more, defines the new reality in Kashmir.

It is the lack of political will to approach Kashmir politically and stay in denial mode, all the time dismissing it as a Pakistan-sponsored movement, brushing it aside as merely a law and order issue, and refusing to acknowledge that an average Kashmiri is politically dissatisfied, that has brought Kashmir back to square one. It was and remains a volcano that has the potential to erupt anytime.

(THE WRITER IS THE EDITOR OF RISING KASHMIR BASED IN SRINAGAR)