PTI chief denies media report­s he has marrie­d for the third time to a girl from 'Maneka family' of Pakpat­tan
By News Desk
Published: July 12, 2016
Tweet Email 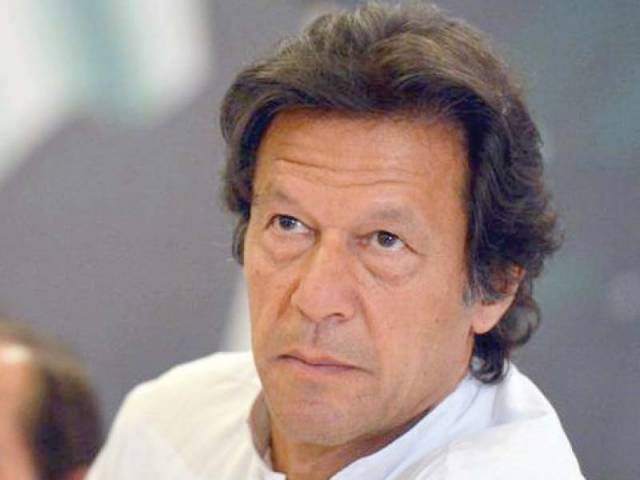 “These reports are baseless and his family members aren’t even aware of any such decision made by him,” Haque said while speaking to Express News.

Shortly after, the PTI chairman also took to Twitter to also deny rumours of a third marriage.

“Rumours about my marriage are absolutely baseless. I have not gotten married. When I do I will announce and celebrate publicly,” he said.

Rumours abt my marriage absolutely baseless. I have not gotten married. When I do I will announce & celebrate publicly.

Media reports suggested Pakistan Tehreek-e-Insaf cheif has married for the third time to a girl from the “Maneka family” of Pakpattan, according to a Pakistan Today report.

Let me clear the air. Imran khan's spiritual leader is my relative. She is getting him married but im sure the girl isnt from Maneka clan.

The report said Imran visited Pakpattan thrice this month to visit his alleged bride Maryam, who is a sister of Imran’s ‘spiritual guide’ Bushra.

According to sources quoted in the report, the new bride is also divorced and has two children.

It isn’t in my blood to give up, says Imran on third marriage

In an interview with Hindustan Times on Sunday, Imran said, “It is not in my blood to give up. But it takes a lot. There’s nothing worse than divorce, I tell you. It’s one of the worst things that can happen to a human being. It doesn’t matter who initiates it, it’s a terrible experience. So I would be a bit more careful.”

However, the senior PTI leader said Imran has made no decision regarding a third marriage. His sisters, however, have been given the responsibility for his next marriage should he make the decision to marry again, he added.

Rumours about IK getting married are totally wrong. He is spending time with his boys in England and will be back in Pakistan on Sunday.

The PTI chairman who divorced his second wife this year also revealed that he had always remained faithful to his spouse while he was married.

“I’m very proud to say that while married, I’ve always been faithful. I had told myself I would not indulge in infidelity and I never did. It is the greatest pain a human being can cause to their partner, which is why in all religions it is a sin,” he said.

Imran said that psychologist had advised him not to get married after his divorce with Jemima because his children might get adversely affected. But when the right time came, he married Reham Khan. However, it did not work out as she had her own family and he had his.

“I am 63 years old and have been married for only 10 years, but I am more of a staunch believer of marriage now than I ever was,” said Imran

Although Imran said that he did not have anyone in mind for the third marriage, he did not shy away from expressing what he was looking for in his third spouse.

“I never judge people for what they are. I’m not into looks that much. I’m not impressed by glamour or fashion. I get impressed by someone who has a belief system, convictions…” he said.

In the meantime, here are some reactions from social media to keep you entertained:

The news about his third marriage is "highly exaggerated". https://t.co/0SufWNzi4W

So #ImranKhan in interview said I will marry for 3rd time in 'FUTURE', and Pak Media suffering frm #BreakingNewsSyndrome says he got married

People is getting Crazy for #ImranKhan's 3rd Shadi. Either they want Chuhwaras or they are angry unky khandaan ki larki nai li. Get a life