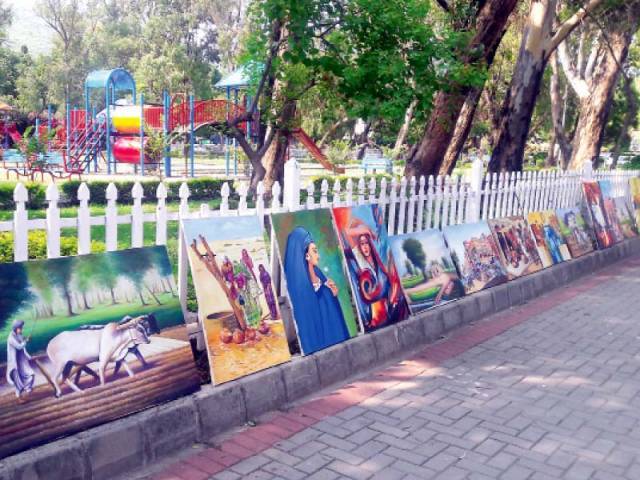 Richly coloured: The paintings are displayed along a footpath near Kohsar Market. PHOTO: SHAZIA MEHBOOB/EXPRESS

ISLAMABAD: Of the people that throng Islamabad’s Kohsar Market, a few stray towards the adjacent park, alongside which Muhammad Bilal displays his art.

Bilal can be seen politely discussing his techniques, — attempting to sell his art pieces.

His smile and calm demeanor remain constant although he barely manages to sell his paintings and is just managing to get by.

The artist has been exhibiting his work here for the past two and a half years.

His talent is obvious, his work depicts traditional themes and cultural scenes – even to a layman.

The richly-coloured, textured paintings are immediately captivating and are clearly the work of an expert.

The collection he showcases consists of his own work as well as that of his uncle.

The work is exhibited from 11am to 6pm, seven days a week, and is his primary means of making a living.

The gifted artist inherited his skill from his father and uncle.

He started working when he was just 10 years old.

“I never went to an art school for formal education,” he says.

Bilal works on his paintings and sketches at night, and sells them during the day.

However, he is unhappy with his profession due to the hardship he is facing.

“I would prefer to keep my son away from this field, as it is very tough and low-paid.”

This was initially a family affair, in which my father and brother also took part, but then my father passed away and my brother went abroad in search of a better living, Bilal explained.

At first, they used to display their art in a shop at Kohsar Market where they earned well.

However, due to financial constraints, they vacated the shop and resorted to displaying their work on the pavement.

Bilal says he avoids having his paintings displayed in art galleries, adding that they take a long time to sell there and that they keep the bulk of the profit for themselves, so he is paid less as a result.

His art is a mixture of figurative paintings, portrait sketches, mix media on classic watercolour paper and abstract paintings.

The effort and handiwork is obvious upon examining the intricate detail, even to the untrained eye.

Despite the brilliance of his work, he sells his pieces at affordable rates, which range between Rs7,000 to Rs15,000, making them accessible to most people.