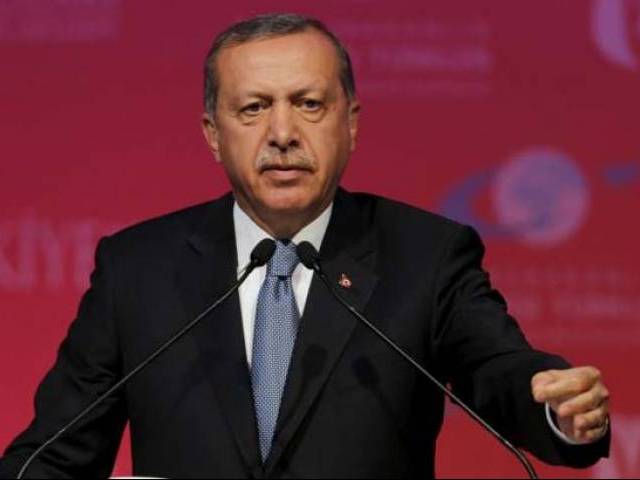 ISTANBUL: President Recep Tayyip Erdogan has defended his plan to give Syrian refugees Turkish citizenship, arguing there was ample space in the country after a backlash against the suggestion, in comments published Monday.

Erdogan said on July 2 that Syrians could eventually be granted Turkish citizenship “if they want it”, in remarks which were met with anger from opposition politicians and social media users.

More than 2.7 million Syrian refugees now live in Turkey, where they have guest status, according to the Turkish government.

In his first comments on the issue since announcing the plan, the president said if Syrians had dual citizenship it did not mean they had to return to Syria once the conflict was over.

“Is it a must for dual citizens, for people with citizenship, to return to their countries of birth?” he told Turkish reporters on the sidelines of the NATO summit in Warsaw, quoted by the Hurriyet daily.

“When Turks went to Germany in 1963, no one asked whether they would or would not return to Turkey,” he said, referring to the Turkish so-called Gastarbeiter who helped Germany’s economic recovery after World War II.

He added: “There is no need to worry, this country has 79 million people living on 780,000 square kilometres of land.

“Germany is half our size and has 85 million people,” he added, lightly overstating the German population.

“We are a country that can easily overcome (challenges).”

The president even suggested that empty homes built by the state housing agency could be used to house Syrians.

Turkey visa deal only once ‘all criteria met’: EU

“Most of these Syrians work illegally.

“What we’re saying is there needs to be a solution. Among these people, there are doctors, engineers, lawyers, health workers, teachers, all of these people can benefit our country: they can be given citizenship,” Erdogan added.

In January this year, Turkey allowed Syrian refugees to be given work permits but only 5,502 Syrians were granted such paperwork, according to Turkish media quoting labour ministry statistics.

The president’s comments come after Haberturk newspaper reported on Saturday that there were plans to give up to 300,000 Syrian refugees Turkish citizenship, targeting skilled individuals.

Soon after the report appeared, #suriyelilerehayir (“No to Syrians”) was the top trending topic on Twitter in Turkey.

Devlet Bahceli, leader of the Nationalist Movement Party (MHP), warned that Erdogan’s plan would cheapen Turkish citizenship and cause ethnic conflict, saying “Turkish citizenship must be deserved and confirmed in good conscience”.

Deputy Prime Minister Numan Kurtulmus, who is government spokesman, said after a cabinet meeting Monday that work on the citizenship plan was in progress but had not been completed.