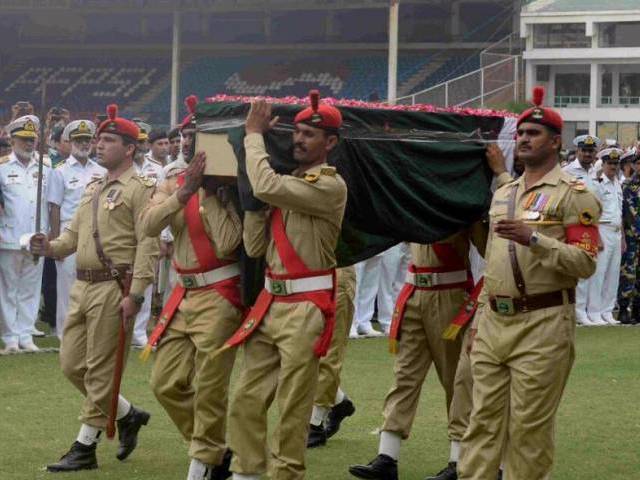 The Hindu – India’s second largest English language newspaper – called Edhi the “Mother Teresa of Pakistan” and a “servant of humanity” while quoting bits from an interview with the philanthropist published in the paper in 2010. PHOTO: INP

As Pakistan mourned the death of its beloved humanitarian Abdul Sattar Edhi, the international community also joined in paying glowing tributes to the founder of the world’s largest volunteer ambulance service.

The American print and electronic media gave extensive coverage to the passing away of Edhi, calling him a revered figure and the “greatest Pakistani” while highlighting his modest living style despite vast sums of money flowing through his charity.

Even in death, Edhi gives light to two blind persons

Leading US-based newspaper The New York Times termed Edhi ‘Pakistan’s Father Teresa’ in the obituary published on July 8. The paper said the philanthropist’s name became “synonymous with charitable causes” and he achieved “an almost saintly status” in a country that is hungry for role models and heroes.

Edhi’s obituary in the Wall Street Journal termed him “a philanthropist whom many Pakistanis considered a national icon”.

The widely circulated newspaper remembered him as “a famously ascetic figure, always clad in simple clothes” who had “no desire for worldly belongings and cared only about serving humanity”.

The US National Public Radio (NPR) referred to Edhi as ‘Pakistan’s Mother Teresa’ while recalling his services to the Pakistani nation.

The obituary on NPR website said Edhi created a network of social services for his country, including a fleet of 1,500 ambulances, 24-hour emergency services, homeless shelters, orphanages, blood banks and homes for unwanted and abandoned infants. “But unlike Mother Teresa, Edhi had to operate in the face of death threats and other obstacles,” it was stated.

The US-based Associated Press in a news dispatch, which was widely used by media organisations across the world, said Edhi was known in Pakistan as ‘Angel of Mercy’ for his social work that also won him international acclaim.

The dispatch was also picked up by the most respected British newspaper Guardian for the obituary of the renowned humanitarian, recalling how Edhi established a welfare foundation almost six decades ago that he oversaw together with his wife Bilquis Edhi.

Edhi’s obituary was among the top stories on the BBC’s Asia page, saying thousands had flocked to witness the funeral of the philanthropist, who “dedicated his life to the poor”.

In memoriam: Major road to be named after Edhi, says Shahbaz

Across the border in India, NDTV said the “legendary Pakistani social worker’s reputation for austerity and generosity resonated deeply” in Pakistan, where he was revered as a ‘living saint’.

The same term was used by The Times of India, which also recalled the role of Edhi in last year’s deadly heat wave in Karachi when his foundation found itself at the forefront of the response while tending to the sick, storing the bodies and burying the poor for free.

The Hindu – India’s second largest English language newspaper – called Edhi the “Mother Teresa of Pakistan” and a “servant of humanity” while quoting bits from an interview with the philanthropist published in the paper in 2010.