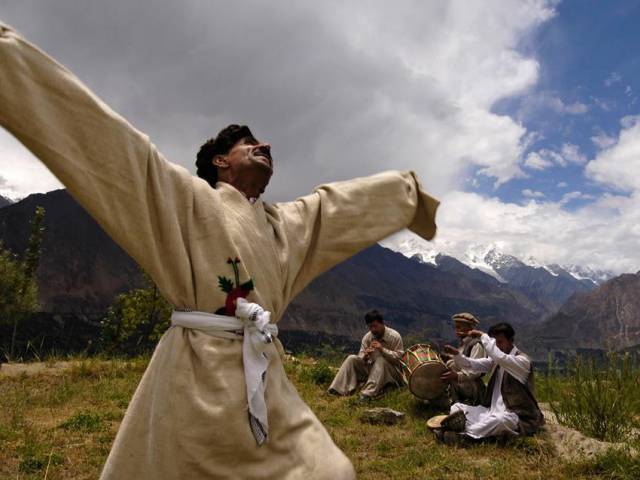 GILGIT: The very mention of Gilgit-Baltistan conjures up images of majestic mountains, amazing glaciers and diverse wildlife. But this remote scenic region is also home to small community of high-mountain people who practice Shamanism, locally called Danyalism. Little is known about this ancient spiritual practice to the outside world.

The practitioners, called Danyals, inhale the smoke of burning juniper branches, dance to a special music, enter into ecstatic trances, drink blood from a freshly severed goat’s head and converse with ‘spirits’ to find solution to the problems of the people who come to seek their help, according to anthropologists.

“A Danyal plays three major roles,” says anthropologist Altaf Hussain, who is a native of Gilgit. “He/she is a spiritual healer, a soothsayer and a bridge between humans and the world of spirits,” says Hussain who studied from the Quaid-i-Azam University in Islamabad.

Interestingly, the centre of Danyalism in Gilgit-Baltistan is Chaprote, a village in Nagar Valley close to the point where continental plates are believed to have collided 55 million years ago. Danyalism is still popular among the natives of Gilgit who seek the practitioners’ services for casting out black magic.

“He [Danyal] was awe-inspiring,” says Tufail Ahmed, a resident of Gilgit who recently called a Danyal to his home to neutralise the effects of a magic spell ‘cast by his enemies’.

“Once in trance, he rushed to the main gate and asked us to dig the ground,” recalls Ahmed. “We kept on digging until he stopped us to recover a piece of paper wrapped in plastic with names of our family members written on it.”

Ahmed believes the Danyal successfully cast out the black magic.  The Danyal is offered money as gratitude for his/her services.

Mujahid Shah, a resident of Nagar, says the process of becoming a Danyal begins with several stages of meditation. “Special music is played and juniper leaves are burnt as incense, which the Danyal inhales to get attuned with the spirits,” he says. Music helps induce a trance, prompting the practitioner to dance. Spiritually, he soars and sings during his mystical journey, and his song is construed as an answer to the problem for which his help has been sought.

“The end of the process is [often] marked by sacrifice, preferably of a goat, whose head is presented to the prospective Danyal,” says Shah who is pursuing his doctoral thesis on indigenous communities and environmental ethics at the Karakoram University.

He/she drinks blood from the goat’s head to appease celestial spirits, says Shah. Subsequently, he drops unconscious only to wake up to a normal self some time later. Thus the prospective Danyal achieves the first state of transformation, the first step towards mastering this spiritual art.

Danyalism is thought to be an ancient spiritual practice in Gilgit, but it is gradually becoming a taboo.

“One big change is the increasing number of women practitioners performing rituals in hijab” says Shah. “The biggest challenge is, however, posed by religious clerics who claim Danyals communicate with the devil which is forbidden in Islam. “As a result, Danyalism is gradually becoming a taboo in Nagar,” Shah says.