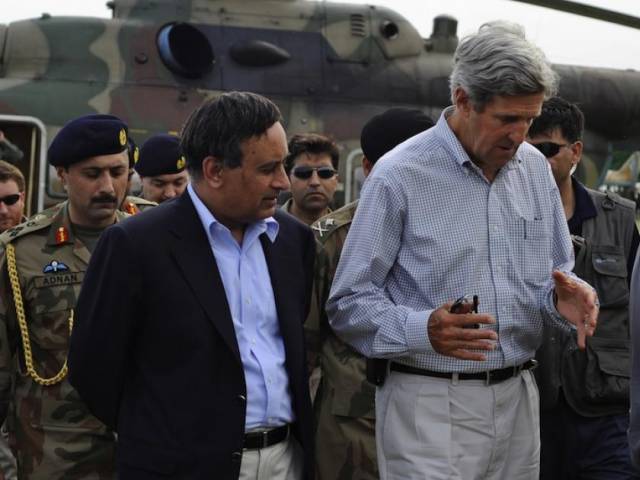 ISLAMABAD: A former Pakistani ambassador in Washington has been lobbying against his own country and creating problems for the government in Islamabad, says foreign policy wizard. Though Sartaj Aziz didn’t name anyone, it was obvious that he was referring to Hussain Haqqani.

“He is trying to circumvent all our diplomatic efforts aimed at boosting bilateral ties between Pakistan and the United States,” Aziz said. “The Foreign Office has serious reservations about his activities in the US.”

Indian PM’s visit to US: International lobby ‘active against Pakistan’

Aziz made the statement in the lower house of parliament after opposition MPs criticized the government over recent foreign policy fiascos. Aziz downplayed the opposition’s criticism, saying Pakistan had the lowest budget for the Foreign Office — Rs15 billion — while Turkey had a Rs82 billion budget and Iran Rs40 billion. “The Foreign Office budget has been increased by 14% over the last three years,” he said.

According to Aziz, Pakistan was pursuing a ‘balanced policy’ based on non-interference and protection of national interests and nuclear assets and its sovereignty.

“Indian Prime Minister Narandra Modi’s recent trip to Muslim countries should not be construed as a failure of Pakistan’s foreign policy,” he said. Pakistan enjoys historical relations with the Muslim world based on common religion, Aziz said. “Modi’s visit will not affect our ties.”

Aziz also said that Pakistan was ‘making successful efforts’ against India’s attempt to seek a membership of the Nuclear Suppliers Group. About the new border management plan with Afghanistan, the de facto foreign minister said: “The war against terror cannot be won without effective border management.”

All is not bad

Aziz said criticism for criticism’s sake would not go down well as the CPEC, Central Asia-South Asia-1000 and besides Iran-Pakistan gas pipeline were the projects for regional connectivity. “Pakistan’s political role will enhance after becoming a member of the Shanghai Cooperation Organisation.”

About Afghanistan, the foreign policy wizard said Pakistan was pursuing a ‘no-favourite policy’ and making efforts to restore peace in the war-ravaged country through the Quadrilateral Coordination Group.

Meanwhile, NA approved 19 demands for grants of four ministries, including the Ministry of Foreign Affairs, Interior, Food Security and Water and Power. The opposition had moved over 700 cut motions but they were rejected in a voice vote.

During discussion on interior ministry’s demands for grants the opposition staged a walkout in protest against the absence of Interior Minister Chaudhry Nisar Ali Khan. PPP’s Aijaz Jakhrani and PTI’s Arif Alvi pointed out the minister’s absence saying, “It exposes the seriousness on the part of the minister that he cannot spare two hours in a year.”

“We will not become part of the proceedings unless the interior minister shows up in the house,” MQM’s Rashid Godil said before opposition MPs walked out.

Earlier, the opposition hit hard at the government over the issuance of a passport and a CNIC to Afghan Taliban chief Mullah Akhtar Mansoor who was killed in a US drone strike last month. They also questioned the implementation of key points of the NAP, including Madrassa reforms.

Haqqani rejected Aziz’s claims and insisted he was entitled to having a different opinion about Pakistan’s interest.