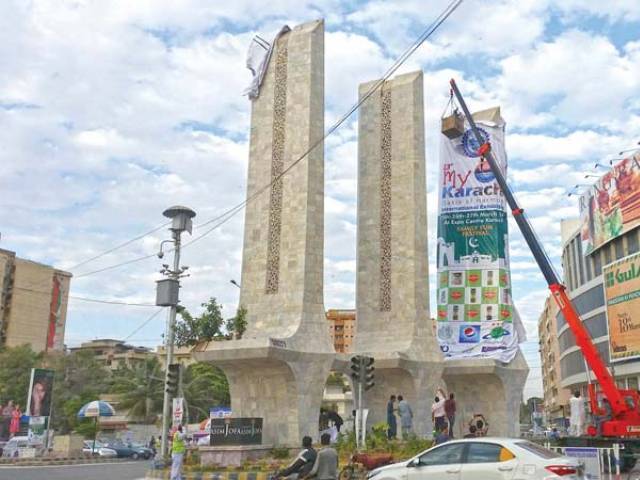 KARACHI: The Sindh High Court (SHC) ordered on Monday the inspection of a pedestrian bridge being built on Main Clifton Road near Teen Talwar roundabout by a private advertising company under an alleged controversial contract to build and use for outdoor advertisements by the Karachi Metropolitan Corporation (KMC).

Headed by Justice Nadeem Akhtar, the division bench also tagged together two petitions challenging KMC’s contract that allows private outdoor advertising companies to build pedestrian bridges and then use them for advertising purposes with certain relaxations in advertisement taxes.

Akram pointed out he had come to know that DMC South had unlawfully awarded several contracts to individuals or companies engaged in the outdoor advertising business to build pedestrian bridges with exclusive rights to display their advertisement signboards or billboards there.

The petitioner said he approached DMC South office with a request to get a copy of the contract but was denied. He said the pedestrian bridge was being built 25 yards away from the zebra crossing at the signal with malafide intentions to favour the advertising company.

“Awarding contracts to install/occupy public property for constructing pedestrian bridges and giving rights to display the advertisement material [on them] is unlawful and against the interest of the common citizens,” the lawyer argued.

Referring to the criteria laid down by the Supreme Court in the outdoor advertisements display case, he argued that where there was a zebra-crossing available to the public, there was no need to build a bridge.

During Monday’s proceedings, the judges were informed that the private advertising company was still continuing construction on the site despite the court’s stay order, which is tantamount to committing contempt of the court order.

Therefore, the court was pleaded to initiate contempt proceedings against the respondent, Zeeshan of Bench Mark advertising company and others.

The same bench also tagged another petition filed by 14 residents of Hamilton Court Apartments, who had also challenged the awarding of contracts by the DMC South to private advertising companies for constructing two pedestrian bridges on Khayaban-e-Iqbal, near Gulf Shopping Centre in Clifton, and another on Sharae Faisal near Regent Plaza. In their plea, they had pleaded to the court to declare the contracts illegal and thus strike them down.