As per FIR, he and his sons tried to scare victim­s after having an argume­nt
By Our Correspondent
Published: June 17, 2016
Tweet Email 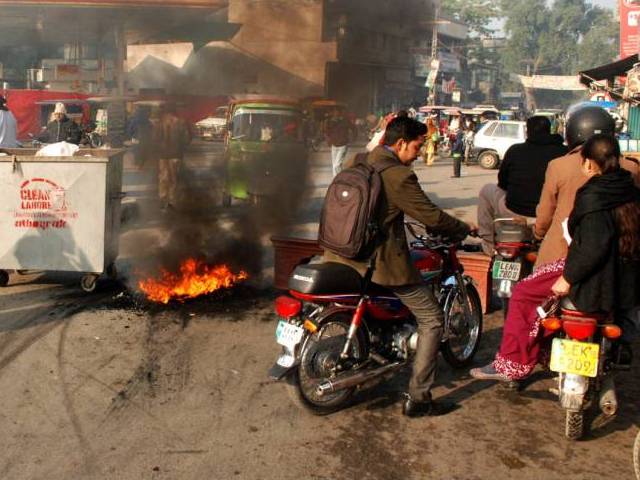 As per FIR, he and his sons tried to scare victims after having an argument. PHOTO: NNI

PESHAWAR: An ousted employee of Kurram political administration, identified as Imran, opened fire in the air during a scuffle with a man, while his son also pointed an automatic rifle at the person near Jan Bakery. The area falls in the jurisdiction of the East Cantt police station.

While talking to The Express Tribune on Thursday evening, one of the victims, Rahat, said Imran opened fire after a heated exchange that transpired in the area.

“Those boys visible in the footage, pointing a gun at me, are his [Imran’s] sons,” Rahat said. The incident caused uproar in the city when CCTV camera footage was aired on television channels, showing an armed man scuffling with another, while two boys, one of them armed with an automatic rifle, pointed his gun.

The East Cantt police filed an FIR in the case. Complainant Syed Arshad Shah stated he, his brother Rahat Shah and four-year-old nephew Syed Hussain were going on a bike. While taking a U-turn, they got embroiled in an argument with a man who was in a car with two boys. “After that, the man scuffled with us and took out his pistol while the boy [with him] had a rifle,” Syed Arshad stated. “The man fired in the air to scare us and fled.”

Cantt SP Kashif Zulfiqar told The Express Tribune Imran and his sons were involved in the case. “Imran voluntarily surrendered to the police and has been arrested.” An FIR was registered. The SP said he contacted Kurram Agency assistant political agent who told him Imran was on contract, but was fired three months ago. He added Imran also had a fake service card with him.

To the other side: 342 schools in FATA to be given to K-P govt