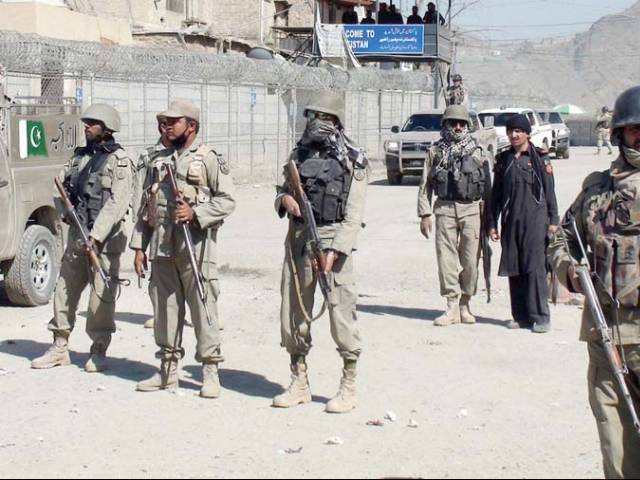 According to security officials and locals, workers were building a gate on the Pakistani side of the Torkham border when they came under fire from the Afghan side.

“We were continuing [with] regular construction on the Torkham border as part of the border management system [when] there was unprovoked firing from the Afghan security forces,” a Peshawar-based official told The Express Tribune.

He added that Pakistani forces responded to the fire, though an official of the paramilitary Frontier Corps was injured.

The political administration added that one Khasadar was also injured in the exchange of fire.

Another official at Torkham said that the incident started at around 9pm on Sunday evening and continued for at least three hours till midnight.

A statement from the military’s media wing, Inter Services Public Relations (ISPR), confirmed the clash and the injury to a soldier. The ISPR, however, did not disclose the identity of the soldier.

“Pakistani security forces responded to Afghan firing effectively,” it said.  ISPR added that the gate is being built by Pakistan on its side of the border. “In order to check movement of terrorists through Torkham, Pakistan is constructing a gate on [its] own side of the border as a necessity to check unwanted and illegal movement.”

Officials say the gate is located some 40 meters inside Pakistani territory.

While it was not clear whether there were any casualties on the Afghan side, locals said there were reports of injured being shifted to Jalalabad for treatment following the clash.

The Torkham border crossing between border Pakistan and Afghanistan has been the scene of some tension between the two countries. A few weeks ago, the border post was shut for four days after Afghan border forces prevented fencing along the border to stop illegal cross-border movements. Then on June 1, Islamabad tightened controls for Afghan travellers requiring proper documentation for crossing into Pakistan.