'Dobara Phir Se’ to not come out on Eid

'Dobara Phir Se’ to not come out on Eid 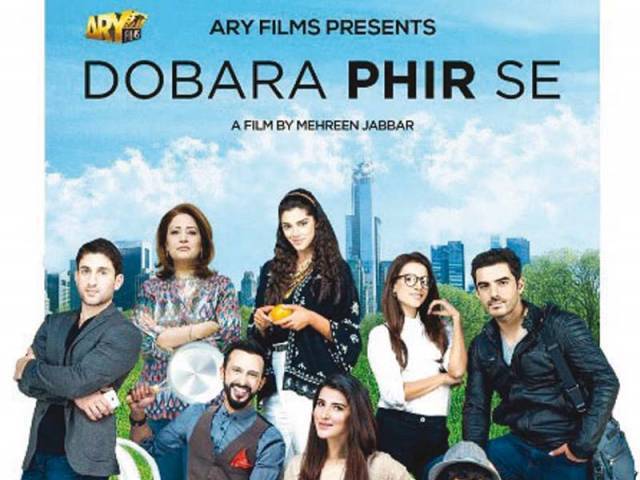 KARACHI: Mehreen Jabbar is one of the very few directors who have had a massive influence on the nascent Pakistani film industry. Her shoulders may have been burdened with great expectations, being the daughter of Javed Jabbar, Mehreen did not fail to impress with her highly-acclaimed feature film debut, Ramchand Pakistani. Eight years on, her second film Dobara Phir Se (DBS) was slated to grace screens on Eidul Fitr, however, it seems the film’s post-production is taking longer than expected.

“We are planning to release it now in August, but are yet to make an official announcement,” Mehreen told The Express Tribune. While a cast member, requesting anonymity, stated otherwise, Mehreen said they had no plans to release the film on Eid. “Eid release dates had never been announced in the first place. The post-production is still in progress.”

‘Dobara Phir Se’ teaser is all about complicated relationships

Without disclosing details regarding factors that caused the delay, ARY Digital Network Vice President Marketing Asfand Yar said, “There is no Eid release, but we definitely plan to release it later this year.”

Mehreen remains optimistic about the movie, and is positive that it will be a box office success. However, one is forced to wonder why no promotional campaigns have been initiated for the film as yet. “The promotions will commence towards the end of the month and we are hoping to create a good buzz around the film,” said Mehreen.  “Which film-maker wouldn’t want his/her film to succeed commercially? I, along with the cast, the film crew and the producers would want DBS to be appreciated, and do really well.”

Mehreen said the film is about the unlikely love story of soul mates that just can’t seem to be in the right place at the right time for the right reasons. “It’s about relationships, friendships and finding one’s way in life.”

Veteran actor Atiqa Odho essays the role of a mother and a mother-in-law in DBS. She and Mehreen have come a long way since they worked together on the latter’s drama Harjai. “Mehreen is not driven by commercial cinema. She likes to show the story the way she wants to tell it, without adding unnecessary masala,” Atiqa said about her director. “She likes to keep the flavour intact by depicting reality-based situations … there are real life scenarios sans exaggeration.”

Commenting on the dismal state of the film industry and comparing it with its Indian counterpart, Atiqa said, “It’s a sad state of affairs and I am certainly not proud to say that a so-called ‘cinema revival’ has taken place. In India, film-making is a massive industry supporting the household of every individual associated with it. This is a trade and the government needs to promote it.”

She added that the business of story-telling in Pakistan has great potential, which if used productively, can make the entire industry prosper.

Urdu e-reader Kitaab will help you read Ghalib, Manto on your smartphone