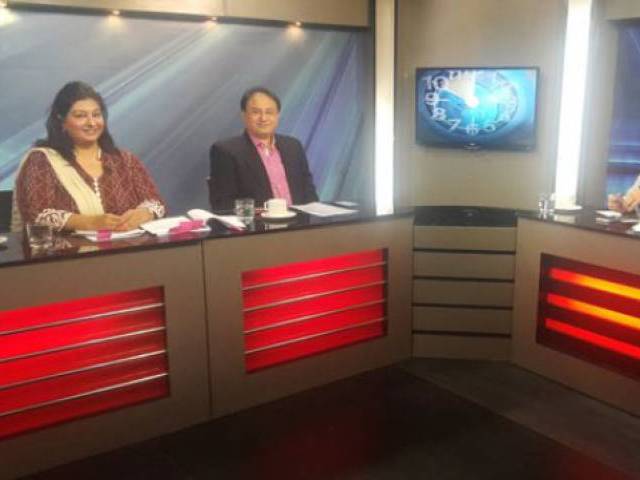 Columnist and rights activist Marvi Sirmad is seen sitting on the left during a private TV show in this Twitter photo of February 28. PHOTO: TWITTER/marvisirmed

Human rights activist Marvi Sirmed was allegedly assaulted by a Jamiat Ulema-e-Islam-Fazl (JUI-F) leader during the recording of a TV show at a private news channel on Friday.

“I have just undergone a very traumatic experience at a News One programme [Nadia Mirza Show] when Hafiz Hamdullah of JUI-F got angry,” the woman activist tweeted.

Describing the incident, Sirmed said: “On a comment by Barrister Masroor. On my turn, I started by saying ‘I agree with Masroor sahib to the extent that’ and here Hamdullah went on and on with his rudeness.”

on a comment by Barrister masroor. On my turn, I started by saying "I agree with Masroor sahib to the extent that" and here Hamdullah (2/n)

and went on and on with his arrogance and rudeness. I responded in almost the same coin. And that's when he started 3/n)

But, according to the columnist, when she responded to Hafiz Hamdullah in the same manner, he vent out his outrage at her by using abusive remarks and even called her a “whore”.

And sadly it all did not end here, Sirmed claimed, as the JUI-F leader tried to beat her on camera. However, PTI leader Fayazul Hassan Chauhan, who was also present during the recording, saved her from the “punches” of the infuriated lawmaker.

I returned this to his own family women. And then he tried to beat me. All of this recorded in camera. (5/n)

Later, the JUI-F leader was taken away by the private TV security, said Sirmed.

Fayaz ul Hassan Chauhan held him so his punches don't reach me. He had to be taken away by the News One security.
(6/n)

And this religious merchant Hafiz Hamdullah was fasting while he did all this!
(7/n)

I am sorry what u went thru. Hafiz Hamdullah is a disgrace. Being a Hafiz had no effect on him.JUI expel him atleast https://t.co/BwWR0jxK5D

Targeting the PTI leader, Asif pointed towards Mazari and said, “Someone make this tractor trolley keep quiet” when she and other lawmakers protested to his speech on loadshedding during Ramazan. However, the minister did not stop there and also took the opportunity to comment on her ‘manly voice’.

“It will be better if you first transform your masculine voice into a more feminine one,” Asif told Mazari during a water and power discussion in the lower house of parliament.