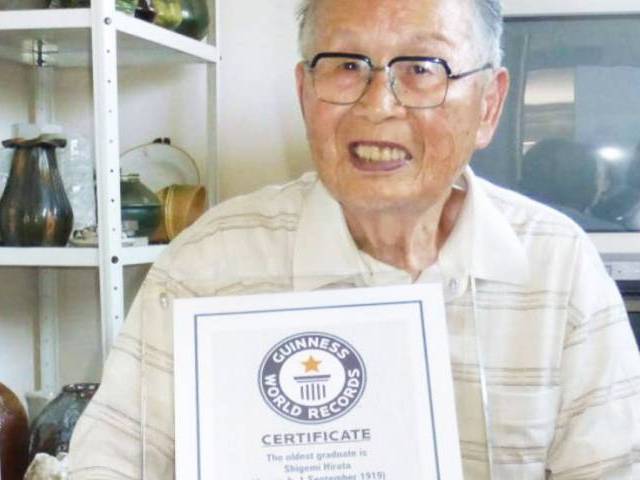 TOKYO: A 96-year-old Japanese man is potty at the prospect of breaking more records after being recognised as the world’s oldest university graduate with his degree in ceramic arts.

Born on a Hiroshima farm in 1919 — the year the Allies and Germany signed the Treaty of Versailles — Hirata is something of a celebrity on campus.

“Students whose name I don’t even know call out to greet me,” he told Japan’s Yomiuri newspaper.

“That gives me a lot of energy.”

Hirata, who took 11 years to complete his ceramic arts course after taking up pottery as a pensioner, insisted he was not done setting records.

Hirata, who served in the navy during World War II and has four great-grandchildren, added: “I’m so happy. At my age it’s fun to be able to learn new things.”

Last year, 100-year-old Mieko Nagaoka became the world’s first centenarian to complete a 1,500-metre freestyle swim, 20 years after she took up the sport.

Many elderly Japanese remain physically active long after other people have given up the ghost.