DHA rape case: ‘We know their names. They are from an influential family.’

DHA rape case: ‘We know their names. They are from an influential family.’ 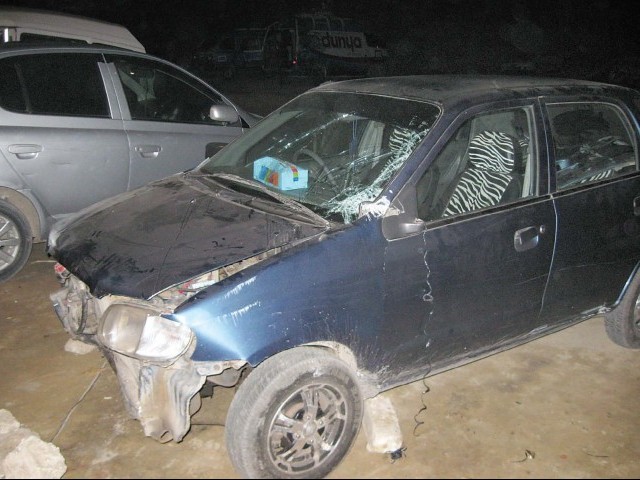 A file photo of the damaged car of the victim into which the assailant rammed his car. PHOTO: SABA IMTIAZ/EXPRESS

KARACHI: As the tide recedes, the traffic melts away on Seaview. Tired families and glowing couples leave the shorefront restaurants and pile on to motorcycles and pick-up vans. The streets are then inhabited by men driving cars with tinted windows, who chase women, calling out to offer them a ‘lift’, promising to show them a ‘good time’.

Women speed up to get out of the area, hoping they won’t be followed home. K, in her early 20s, never had a chance when she was driving near Seaview on December 20. Her car was forcibly stopped. She was pushed into a silver Corolla by men who allegedly gang-raped and then dumped her off in DHA Phase II Extension.

The Clifton police investigated the case extensively. A great deal of evidence was collected, from CCTV footage to details about the car used and photographs of the perpetrators. The names of the culprits have been revealed to K’s friend M, who filed the First Information Report (FIR).

Yet the police are waiting to charge and arrest those guilty of the crime.

“The culprits are from an influential family so the police cannot arrest them,” railed M, even as he praised the work of the investigation team. “The police have investigated this case properly and they have all the evidence. They have identified the car and the culprits. They have CCTV footage which shows a silver Corolla chasing the blue Alto the girls were in before they stopped them.”

As the case remains in limbo, the days tick by slowly for the victim, K.

“Justice!” M exclaims angrily. “There is no justice in this country. I went to register the FIR because I felt it was my duty to help her as a human being. She was so brave, she went to the hospital and then to the Darakshan police station. But what happened to us there was terrible. There were a dozen policemen, from SHOs to SPs to the DIG, asking K to narrate the crime over and over again, asking her questions like ‘how many men were there?’” They were enjoying it.”

M alleges that he was beaten up at the police station. He continues to follow up on the case, despite the ‘notoriety’ that came with his act of compassion. “My picture was shown on every TV channel as if I was the rapist. I had merely stepped in front of the girls to deter the cameramen from getting footage of them,” he told The Express Tribune. “I filed the FIR because I wanted her to get justice but I do get scared that I could be implicated in some fake case. The culprits live close to my house and they could easily have me picked up tomorrow.”

“K and I went to meet Sharmila Farooqui at her office several times but nothing came of it,” he says. “We have been trying for so long to get justice and are still willing to go ahead. We have not left the city and are cooperating with the police. But even a police officer asked me, ‘Aapke paas Quaid-e-Azam hai?’ (Do you have money?). He said, ‘If you don’t, forget about getting justice in Pakistan.’ I do not know if they are waiting for the girl to address a press conference and name the perpetrators. What if the police haven’t told us their real names?”

Investigating officers insist they are building a strong case against the culprits. However, if the perpetrators are well connected, the police may be safeguarding their own long-term interests by delaying charging someone.

In cases involving influential citizens, police officers have often faced the brunt of charging them because they may be taken off the case, threatened, suspended or transferred elsewhere. In an alleged case of a minor’s rape in Khipro, Sanghar district, the defendant’s lawyer said the police would not even bring the accused to court hearings because they belonged to an influential family.

“Let alone humans, even animals don’t deserve to live in this country,” M says. “We should not even claim that we are ‘proud’ to be Pakistani.”

Big fun for little ones at nature carnival