Three of the injure­d, two Pakist­anis and an Afghan, were hospit­alised, two of them with head injuri­es
By AFP
Published: June 3, 2016
Tweet Email 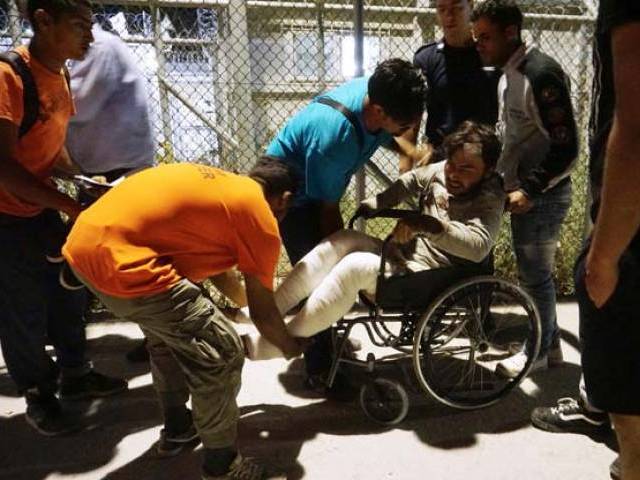 Volunteers help an injured migrant, following overnight clashes between migrants at the Moria migrant detention camp on the island of Lesbos, early on June 2, 2016. PHOTO: AFP

MYTILENE, GREECE: Over a dozen migrants were hurt Thursday in a brawl in the main detention camp on the Greek island of Lesbos that also saw nearly 30 tents torched, an AFP correspondent said.

Hundreds of people — mainly families with children — were evacuated from the camp during the night as rival groups of Afghans and Pakistanis went at each other with clubs and stones, the journalist said.

Refugees get Pakistani chef after protesting over ‘bad’ Italian food

Three of the injured — two Pakistanis and an Afghan — were hospitalised, two of them with head injuries. Firemen intervene to extinguish a fire at the Moria migrant detention camp, on the island of Lesbos, following clashes between migrants early on June 2, 2016. PHOTO: AFP

“There was a clash between migrants from Afghanistan and Pakistan late Wednesday in which three people were seriously hurt and were taken to hospital by ambulance,” a local police source told AFP.

There were nearly 3,000 people in the Moria camp ahead of the clash, most of them asylum applicants trying to avoid deportation to Turkey under an EU deal that went into effect in March.

Nearly a thousand of them have now left, seeking refuge in the surrounding fields and in another migrant camp, the AFP correspondent said.

Pakistani, Afghan refugees lead to boom of cricket in Germany

The spokesperson of the UN refugee agency’s mission to the island, Boris Cheshirkov, confirmed the incident but said the situation was “back to normal” on Thursday. A migrant family receives medical assistance, after overnight clashes between migrants at the Moria migrant detention camp on the island of Lesbos, early on June 2, 2016. PHOTO: AFP

Lesbos Mayor Spyros Galinos said anxiety has increased among migrants detained for months and facing deportation to their home countries, which they have spent a small fortune to escape.

“These conditions are psychologically and physically exhausting… and breed exasperation,” he told AFP.

There are an estimated 8,500 refugees and migrants held in special-purpose facilities on Greek islands, where they landed earlier this year after crossing the Aegean from Turkey.

They are detained for a maximum of 25 days. After that point they are allowed to leave the camps but are required to stay on the islands until their asylum applications are processed.

No migrants have been able to leave Greece after Balkan states began shutting their borders in February to stem an exodus of thousands to northern Europe.

As a result, over 50,000 people have become trapped in Greece, most of them in overcrowded camps where poor living conditions have frequently been criticised by rights groups.