Lahore shootings: As the case unfolds, the mystery deepens

Lahore shootings: As the case unfolds, the mystery deepens 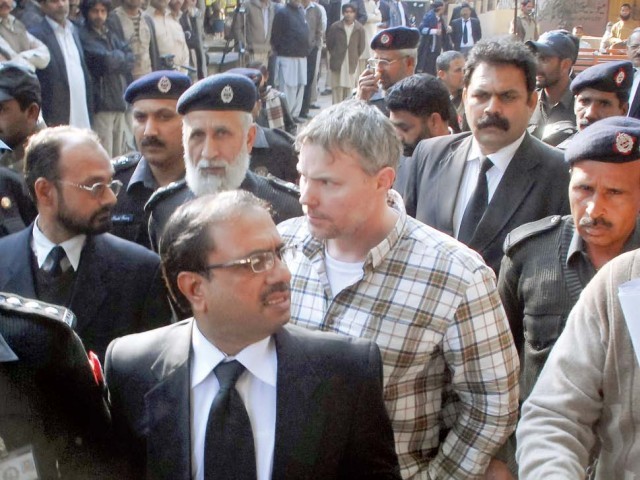 US consulate employee Davis is escorted by police and officials after appearing before a judge in Lahore. PHOTO: REUTERS

ISLAMABAD/LAHORE: As the US diplomatic machinery moved to calm a brewing storm over Thursday’s shooting incident in Lahore involving an official attached to its consulate, peculiar details are trickling in regarding the exact identity of the man.

US Ambassador Cameron Munter is learnt to have met Foreign Secretary Salman Basheer, requesting the federal government’s intervention in the case of US official Raymond Allen Davis, who gunned down two young motorcyclists near Lahore’s Qurtaba Chowk in apparent self-defence. The case is currently being handled by the Punjab government, and Davis has been remanded into police custody for six days, according to police officials, by a magistrate.

Munter, according to well-placed sources, is said to have brought up the Geneva Convention, under which diplomats are allowed diplomatic immunity. The provincial government has so far refused to bring the international protocol into play. Other diplomats are also learnt to have tried to contact the Punjab government.

The Foreign Office is learnt to have contacted the Punjab government requesting case details. There has also been a meeting between Chief of Army Staff Gen Ashfaq Parvez Kayani and Interior Minister Rehman Malik regarding the matter.  Gen. Kayani is said to have advised Malik to handle the matter with ‘extreme care’ given its sensitive nature. He also advised that, aside from the apparent diplomatic links, Davis’ military links should also be kept in mind as the case moves forward.

Also discussed was the law and order situation that could arise if Davis is granted immunity.

According to records available with The Express Tribune, Allen Davis, aged 37, visited Pakistan for the first time on October 18, 2009, landing in Islamabad. His last entry into Pakistan was on January 20, 2011, when he landed in Lahore’s Allama Iqbal International Airport.

Davis travelled using a regular passport, on which he had regular visit visas. There was no diplomatic passport.

Insiders say that Davis was performing duties as a technical advisor serving in the Intelligence and Security Wings of the US Embassy in Islamabad and the consulate in Lahore. He also made frequent visits to Karachi and Peshawar. The police are said to have recovered an identity card from Davis for the US’ Peshawar consulate.

Pakistani intelligence agencies have so far not reached any conclusion and had not submitted a report regarding the incident till the filing of this report. However, initial data suggests that police or other security/intelligence agencies had no record or intimation of Davis’ movement or participation in official events since he first arrived in Pakistan in 2009.

According to policy guidelines and security advisory issued by the Foreign and Interior Ministries, US officials are, for their own security, not meant to move around without informing security officials due to the terror threat in the country. The vehicle Davis was driving was locally-registered, and did not have diplomatic number plates.

Initial reports revolved around a possible looting attempt by the men on the motorcycles, to which Davis is said to have retaliated. Conversely, some reports rejected the robbery bid. However, it is unclear what would have provoked Davis to open fire.

A new angle to the incident, submitted in a statement by Davis himself, has it that the vehicle he was driving had had a minor collision with a Rickshaw a little before the incident. Therefore, if not a robbery, the two men could have chased the vehicle to argue with the driver.

Tristram Perry, the information officer of the US Consulate in Lahore, did not answer queries regarding Davis’ immunity, saying that he has been requested by Islamabad to not comment on the incident. “We are working with Pakistani authorities to determine the facts and work toward a resolution,” he said

FIRs against the deceased

Meanwhile, though it was initially reported that the two deceased motorcyclists had no criminal record, the police registered FIRs against them posthumously on Friday, police sources told The Express Tribune.

The complainants, Doctor Farzand and Sheharyar Malik, in a written application, state that the two had robbed them of their mobiles and cash just before the incident and were fleeing.

As evidence, the two have referred to phone logs of calls made to Rescue 1-5 about the incident right after it happened. The police say that two mobile phones were recovered from the deceased which matched the description of those the applicants had complained to 1-5 had been stolen.

In the FIR registered against Davis, the police have also included charges of carrying an illegal weapon – a Glock pistol and two magazines. The police also recovered a digital camera, a phone tracker with a charger.

Conversely, the police so far have no information about the other vehicle that came to rescue Davis and crushed a motorcyclist – Ibadullah – in the process. After killing the man, the vehicle fled from the scene. Davis did not disclose who was heading to his rescue, but did tell the police that, after the incident, he telephoned his Regional Security Officer who might have sent some officials for his rescue.

A police officer, on condition of anonymity, said that they had, through the Lahore Capital City Police Officer, sent a formal request to Pakistan’s foreign office to contact the US Consulate to identify those in the vehicle for their arrest.

The security of the US consulate has meanwhile been increased in light of increasing protests against the incident, The Express Tribune has learnt.

WITH REPORTING BY SONIA MALIK AND RAMEEZ KHAN