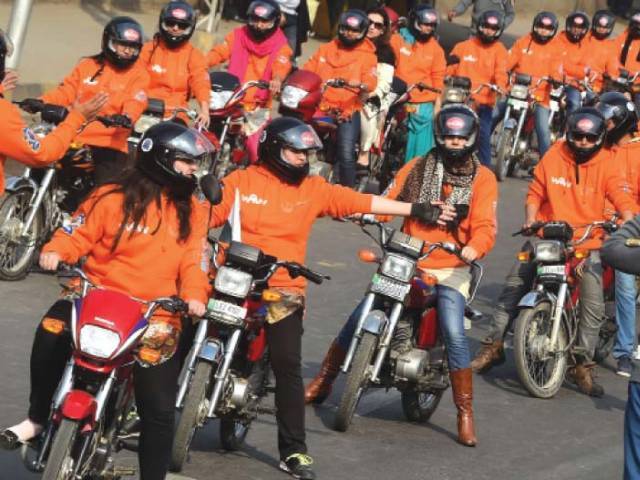 A group of women riders in Rawalpindi. The trend is growing in the twin cities. PHOTO: EXPRESS

ISLAMABAD: Women in the Rawalpindi and Islamabad have slowly started to using motorcycles primarily due to affordability and ease of commute. Many for some time now have complained of the high cost of cab rides and poor intra-city public transport service.

A number of women have turned to using motorcycles as they say its time effective and help them carry out their routine jobs with relative ease.

The trend in the twin cities caught on, following the Lahore Traffic Police initiative of providing free-of-cost motorcycle training to women in the provincial capital.

Asma, a college student, riding a bike in F-6 with her mother in the pillion said, “My mother is a widow and I am taking her to a bank for some urgent work. It is not affordable to hire a cab all the time, so I decided to start motorcycle driving.”

She said that her brother was a little reluctant in the beginning but later he realised that travelling by public transport was not comfortable.

“Now it is easy to take my mother to the hospital, bank, grocery stores, relatives’ homes etc,” Asma said.

Rafia Begum, Asma’s mother said that she was proud of her daughter as now she could manage various chores without wasting time besides saving money as fuel consumption of motorcycles was very limited.

Afshan, another girl in G-11 who rides a scooty said, she was studying at Urdu university and it was hard for her to reach campus and return using public transport, so she bought a scooty.

Now I am not dependent on anyone, she added.

“In the beginning, I face some awkward response from family and also from university colleagues but now I am used to it,” Afshan said.

Society should understand that women are fulfilling a number of responsibilities so they should be given space of easy and affordable mobility. “It is a need, not a fashion trend,” she stated.“I have met almost half a dozen girls who are riding motorbikes or scootys in the twin cities and all belong to middle class families who cannot afford cabs or cars,” Afshan said.

She requested concerned authorities that a separate petrol refueling point should be reserved for women at every fuel station or priority should be given to them.

Motorway Police Public Relations Officer Javed stated that it was a good trend and also the need of the hour.

He said that if women were interested the department could give them training at their driving schools.