Anger boils over in Egypt

Anger boils over in Egypt

The street­s were litter­ed with rocks thrown by protes­ters in respon­se to the firing of tear gas.
By AFP / PPI
Published: January 28, 2011
Tweet Email 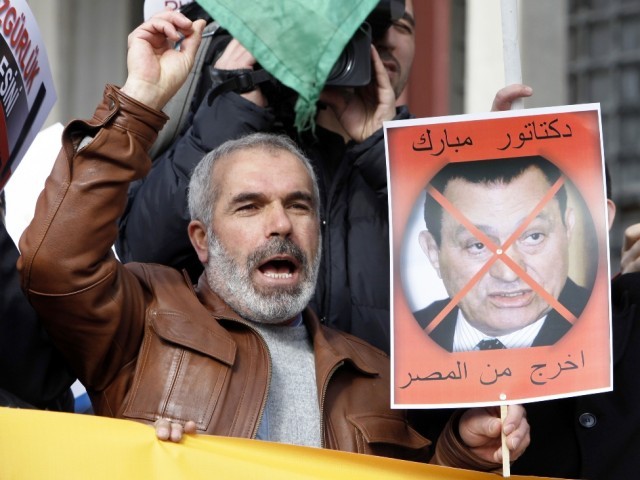 A man holds a sign with a picture of Egypt's President Hosni Mubarak that reads: "Dictator Mubarak, get out of Egypt" during a protest held in solidarity with the Egyptian protesters, after Friday prayers in Istanbul January 28, 2011. PHOTO: REUTERS/FILE

ALEXANDRIA: An enraged crowd turned on the police in Egypt’s historic Mediterranean city of Alexandria as anti-regime protests came to a head after Friday prayers and left at least one demonstrator maimed.

Anger has been brewing since the demonstrations began on Tuesday shouting for veteran President Hosni Mubarak to stand down as they flooded out of a central mosque.

“We don’t want him,” they chanted, as police used rubber bullets and fired tear gas to disperse the protesters who fled into side streets, regrouping later in several parts of Egypt’s second largest city.

Infuriated demonstrators overwhelmed the police in several locations, taking over trucks and setting them on fire.

An angry crowed pushed into the police when they saw a protester whose hand was severely injured being carried away by friends.

Pro-democracy youth groups have launched a call for nationwide protests to kick off through social networking sites, which have since been cut to stop the rallies from gaining momentum. The massive turnout from the first day seemed to have spurred many to public dissent for the first time.

“This is the first time I have ever joined a demonstration,” said Abdo, one of thousands of Egyptians who poured onto the streets of Alexandria as the protests entered their fourth day.

Along the beach hundreds of angry young people marched down the corniche, shouting the protests’ signature  chant: “The people want the ouster of the regime.”

Until Tuesday, most demonstrations in Egypt had been reserved for seasoned political activists.

The streets were littered with rocks thrown by protesters in response to the firing of tear gas as onlookers cheered on the demonstrators from the windows of their seafront buildings.

The Egypt rallies are inspired by the ground-breaking “Jasmine Revolution” in Tunisia, which culminated in the ouster of strongman veteran Zine El Abidine Ben Ali after 23 years in power