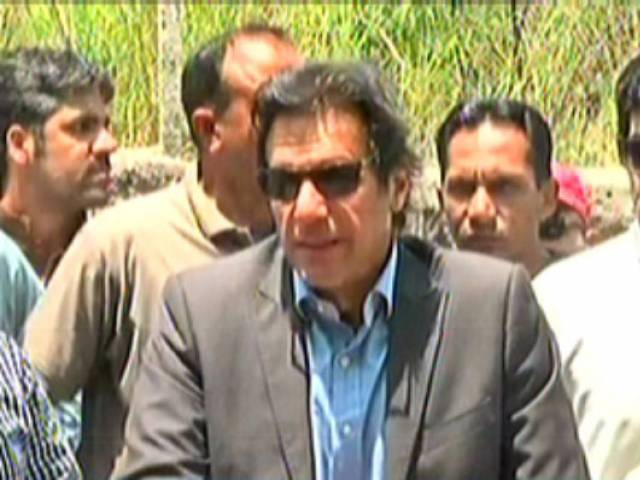 An Express News screengrab of Pakistan Tehreek-e-Insaf chairman Imran Khan talking to media outside his residence in Islamabad on May 16, 2016.

Pakistan Tehreek-e-Insaf (PTI) chairman Imran Khan on Monday dismissed allegations that he concealed his assets through an offshore company, saying he was answerable before the parliament.

“It was a legal requirement to acquire property in the UK through a company so I had to buy the company. I never hid my assets, my flat which I sold to buy property in Bani Gala,” the cricketer-turned-politician said.

Imran went on to claim that he brought his London flat legally through the money on which he paid all the taxes. “I have all my tax returns paid since 1982.”

“Nevertheless, I am ready to respond to the questions [about the offshore property],” Imran maintained.

Earlier, Imran who had just returned to the country from his UK trip said, “I am not among those who level counter allegations on their opponents instead of presenting the facts before the nation. I will first clarify myself. In democracy, a leader does not put counter allegations. I am accountable to the people.”

The PTI chief said a meeting of the joint opposition is being held which will formulate the strategy to be adopted in the lower house of the parliament. “I want to discuss everything before the prime minister in the assembly. This is a great moment for democracy and it will further the democratic culture in the country if prime minister responds to the questions of the opposition in the assembly.”

“Times have changed. Pakistan has reached to a state that it can no longer be run the way it has been run previously. You cannot come in power, make illegal money and attack those who question you by running a smear campaign through a media house. No one can hide in the age of social media. Imran and Nawaz are equally accountable to the people,” he added.

Regarding Chief Justice of Pakistan Anwar Zaheer Jamali’s refusal to form a judicial commission on government’s plea to probe the Panama Papers leaks, Imran said the opposition’s stance has been vindicated. “Everyone knew the chief justice will reject the TORs presented by the government. The chief justice said the right thing. If Nawaz Sharif is serious and thinks that he is innocent then he should sit with the opposition and discuss the TORs.”

Last week, the PTI chairman admitted that he formed an offshore company in 1983 during his cricketing years in London. Speaking to reporters at London Heathrow Airport, Imran said he formed the offshore firm on the advice of his accountant to “avoid UK taxes”. “I was already paying 35 per cent tax on my income there, so to avoid further taxes, I bought the flat through an offshore firm, which was my right as I was not a British citizen,” he said, adding, “There is no illegality in it.”

The opposition had last week prepared seven questions for the prime minister to answer on the floor of the assembly.

The prime minister is expected to address a joint session of the Parliament today [Monday] where he will respond to the questions of the opposition regarding his family’s alleged offshore wealth. “People should wait for Nawaz’s speech in which he will respond to questions of the opposition and other parliamentarians,” Information Minister Pervaiz Rashid said on Sunday.