Since its launch Faizan Aslam’s BookMe has been making steady progre­ss and has expand­ed operat­ions to Myanma­r
By Osman Husain
Published: May 12, 2016 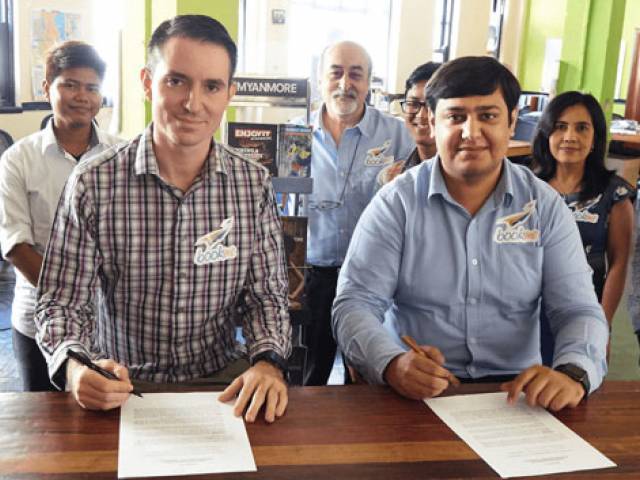 Faizan Aslam, founder of ticketing startup BookMe, was your typical college student. Idealistic, full of energy, eager to make an impact on the world, and periodically short of cash.

His first entrepreneurial endeavor was a simple printing business. Faizan, who shared his college dormitory with 2,500 other students, bought a basic Inkjet printer for approximately US$30 and started charging his peers a few cents for simple printing jobs.

Alternative printing facilities were located a fair distance away and this rudimentary solution was cheap and convenient. “It was sort of my first startup,” he laughs.

The other issue Faizan faced was his self-confessed problem of “not being able to live without the internet.” Unfortunately in the mid-2000s accessing the internet was a costly proposition in Pakistan. Despite improved cash flow due to his printing solution, Faizan was eager to earn more to be able to afford unfettered online access.

Luckily for him, a new internet service provider was setting up shop in Islamabad and was eager to cater to students. Faizan, at the time a college sophomore, visited their office and negotiated a special deal.

He eventually signed on as a sales rep for the company and helped market the service amongst his peers, earning commissions on each sale. In his first month alone he sold more than 500 modems, making a handsome profit of almost US$3,500.

Bitten by the entrepreneurship bug Eventually sales hit a plateau but by now Faizan was hooked onto the entrepreneurial bug. He had successfully identified a market opportunity and reaped the windfall. He knew the internet was a great equalizer and wanted to leverage it further.

Faizan, a software engineer by training, roped in a friend and opened an account on freelance site Rent A Coder. He nabbed his first few projects almost immediately: designing websites and logos, and dabbling in data entry.

Within a few months the freelance assignments started picking up significantly, and by the time Faizan had graduated from college, he booked more projects than he could handle.

Sensing that this was a good problem to have, the aspiring entrepreneur decided to legitimize his business. Like most well-intentioned Asian families, Faizan’s parents initially resisted his plans.

They couldn’t fathom how someone would want to earn their livelihood over the internet and implored him to change his mind. Faizan did his best to allay their concerns and proceeded with his plans. He registered a company, hired a team of programmers, and opened an office.

The new company, Makro Pak Solutions, no longer relied on freelancing platforms to source projects. Faizan’s roster of clients had grown to an extent that he was able to tap existing networks for outsourcing/consulting work. As he scaled up, his team grew to more than 30 people.

“We had one client in the UK who gave us a lot of work. He gave us so much work that we started refusing other clients. Eventually our team scaled to 30 people and we moved into a newer, fancier, purpose-built office,” recalls Faizan.

By now he was confident that his venture was moving in the right direction and envisaged even better times ahead. Unfortunately, disaster struck. Faizan’s client, who had unnervingly delayed a couple of payments, informed him that his firm had gone bankrupt.

Makro Pak Solutions had receivables of around US$65,000, but was part of a long line of creditors. The liquidation process would take time and Faizan knew he would only get a fraction of what he was owed.

The entrepreneur had gambled by putting all his eggs in one basket. The tactic failed. With very little cash left in the bank, Faizan was forced to lay off almost all his staff. The ones who remained did so out of personal loyalty rather than unbridled optimism for the future. It was a tragic state of affairs.

Faizan was now back to square one but determined to forge a new path. Unwilling to venture back in the world of outsourcing, he thought it’d be a good idea to build his own products instead.

Pakistan was gradually opening up to the internet age, broadband penetration was rising fast, and he foresaw an opportunity to engineer platforms these new internet users would find useful.

The idea, a portal for online classifieds and community listings, never got off the ground. Faizan, who partnered with a couple of other aspiring internet entrepreneurs for this project, recalled how the team was obsessed with perfection. “We wanted everything to be perfect before we launched, and in that attempt, it never saw light of day,” he explains.

“From there I realized nothing can be perfect. You have to take a lean approach. Don’t be afraid to launch with even a working prototype, and then pivot and iterate once you receive feedback.” Despite working for almost a year, the project eventually tanked.

By now Faizan was married. After two failed attempts to buy cinema tickets with his wife, he understood this was undoubtedly a pain point experienced by other consumers. His new startup, BookMe, an online ticketing portal for movies, events, and buses was borne out of a desire to help others.

12 Pakistani startups which raised funding in 2015

Since launch, BookMe has been making steady progress. It’s been a Startup Arena finalist at Tech in Asia Jakarta 2014, expanded operations to Myanmar, and most importantly raised cash valuing the firm at US$4 million.

“I’ve applied all the learnings from my previous failures in BookMe,” explains Faizan. “We try to be as lean as possible, diversify revenue channels, and keep building products that our users want. Nothing can ever be perfect but it’s important to keep learning and growing.”