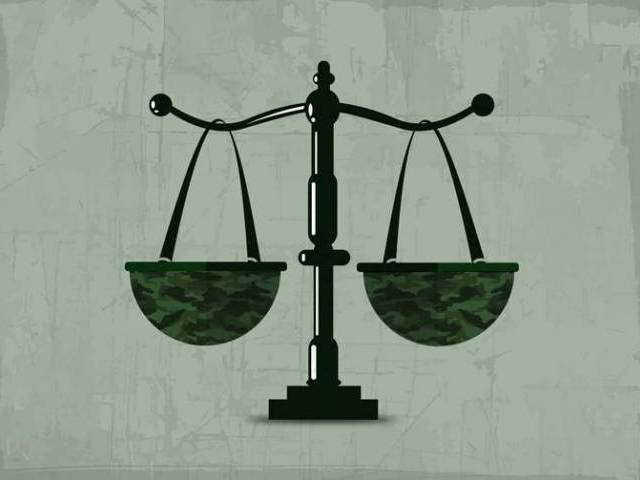 ISLAMABAD: The top court has stayed the execution of three convicts sentenced to death by military courts on terrorism charges.

On Tuesday, the three-judge apex court bench headed by Justice Amir Hani Muslim issued notices to the Attorney General of Pakistan and Judge Advocate General offices while adjourning the hearing for an indefinite period.

Fateh Khan, Fazle Ghaffar and Taj Gul had been convicted by military courts over their involvement in terrorist activities. After the rejection of their plea by the Peshawar High Court, these convicts approached the apex court. Renowned barristers Asma Jahangir and Ahmad Raza Kasuri are representing the convicts.

The conviction of Taj was challenged by his brother Ajab Gul, a resident of Upper Dir. The plaintiff stated the family came to know about his brother’s death sentence by a military court through the print media.

The military’s media wing – the Inter-Services Public Relations – in its press release had stated: “The convict was an active member of Tehreek-e-Taliban Pakistan. He was involved in attacking law enforcement agencies, which resulted in deaths of police constables and Levies personnel. He also kept possession of firearms, ammunition and explosives.”

Fateh’s conviction has been challenged by his mother Zarba Khela. His execution was scheduled inside Kohat prison on March 30 but on March 29 the Peshawar High Court had stayed his execution.

The petitioner claimed her son was taken into custody by security forces on November 20, 2014, from the Sarband area in Peshawar. Finally, she filed an application of his missing before the high court on December 19, 2015, which has been rejected.

Fazl was among the 13 convicts, whose convictions were announced on March 15.

This is not the first time the Supreme Court has stayed executions of terror suspects convicted by the military courts, which were set up after the Peshawar school carnage of December 16, 2014. The military courts have so far awarded death sentences to 88 people.

The high court has decided several writ petitions filed by convicts of the military courts.

All such petitions have been dismissed. Family members of some of the convicts had subsequently filed appeals before the Supreme Court and the cases are now pending with the top court.

A senior official confirmed the defence lawyers have already examined the record and now they will present their arguments before the larger bench.

The larger bench is examining whether or not those convicted by military courts have been provided a fair trial as per their rights.

All the counsel for convicts have pleaded that their right to a fair trial, as guaranteed under Article 10A of the Constitution, was denied as they did not receive the copies of the military court judgment nor were they afforded the opportunity to engage a counsel to defend themselves.