'Udaari' stars walk the ramp at BCW finale for a cause

'Udaari' stars walk the ramp at BCW finale for a cause 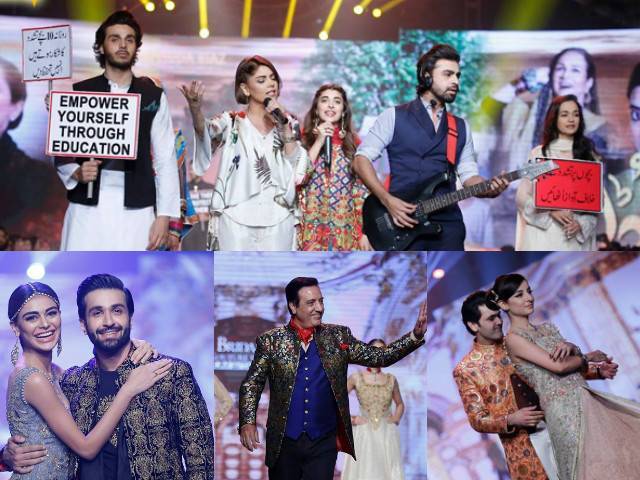 The finale of this year’s Bridal Couture Week Gold Edition offered a lot more than sartorial spectacles and amazing performances. Day 3 of the bridal extravaganza raised the bar as the leading cast of Udaari took to the ramp to create awareness about child abuse.

The hit TV serial has earned praise for highlighting the issue and the makers, it seems, are leaving no stone unturned in promoting the message. On Sunday, Bushra Ansari, Samiya Mumtaz, Ahsan Khan, Haris Waheed, Urwa Hocane and Farhan Saeed sashayed down the ramp, holding placards with thought-provoking messages.

However, it was child star Areesha who clearly stole the show as she made a bold statement while exuding innocence on the ramp. Here are all the showstoppers: But that wasn’t it!

Ace designer Amir Adnan set a new record as a host of celebrities turned showstoppers to unveil his ‘Ceremony Collection’. Master couturiers Kamiar Rokni and Hasan Sheheryar Yasin also gave a thumbs up to the luxe collection as they turned showstoppers for their fellow designer. Here is the complete star-studded line-up: All in all, BCW surely created a history by bringing out the best of entertainment and fashion industry.