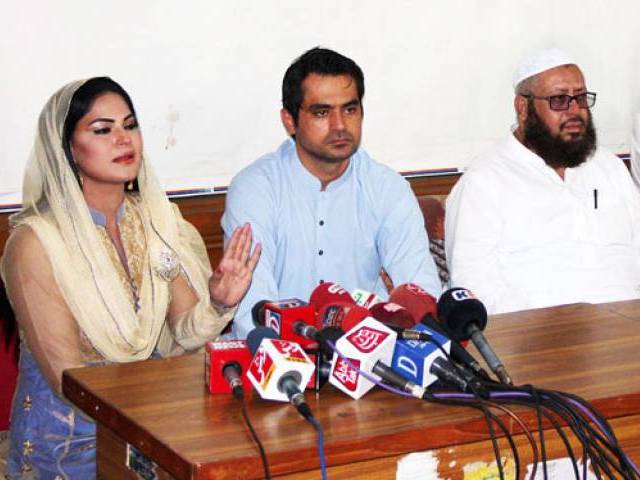 Veena Malik talking to media alongside her husband Asad Bashir Khattak in Jamia Binoria seminary in Karachi on May 7, 2016. PHOTO: ONLINE

KARACHI: Lollywood actor Veena Malik said on Saturday that she would like to join Jamia Binoria al Aalmia to receive education from the Islamic institute.

“I had started reading Islamic books given to me by Junaid Jamshed when I was expecting after which I decided that one day I will seek Islamic education from Binoria University,” she said while visiting the seminary at the Karachi’s SITE area along with her husband Asad Bashir Khattak.

“I also want my son to become Hafiz-e-Quran [the one who memorises the Holy Book],” she added.

The infamous actor and her husband met local as well as international students in the girls’ section of the institution.

Speaking to the media after her visit, Veena appreciated the seminary’s scholars for welcoming both of them. “This institute not only opened its doors to me but Mufti Naeem also gave me a status of daughter having guided me at every stage of my life.”

My life, she said, changed upside down owing to my husband Asad as he is very religious himself.

The Lollywood actor said it was due to the efforts made by Mulana Tariq Jameel and Junaid Jamshed that she embraced a change in her life. “They [Islamic scholars] helped me every time I became upset.”

During the visit, the couple, along with the head of the varsity, Mufti Muhammad Naeed also spoken to the reporters.

In January, Veena had returned to Pakistan, touching down in Lahore with her husband and two children.

Upon her return, Veena told the media about her plans to participate in human rights campaigns and other goodwill social activities.

Further, soon after the Bacha Khan University (BKU) in Charsadda district of Khyber-Pakhtunkhwa (K-P) reopened after a deadly terrorist rampage, Veena had visited the campus too.

According to reports, Malik reached BKU to take part in a Quran Khawani and peace walk being held for the 22 martyrs of the brazen attack.

Need of the hour : Citizens call for ‘Zarb-e-Aman’