The curious case of the two Younus Khans

The curious case of the two Younus Khans

It is a traged­y that at the twilig­ht of a stupen­dous career, Younus Khan is busy shooti­ng himsel­f in the foot
By Emmad Hameed
Published: May 1, 2016
Tweet Email 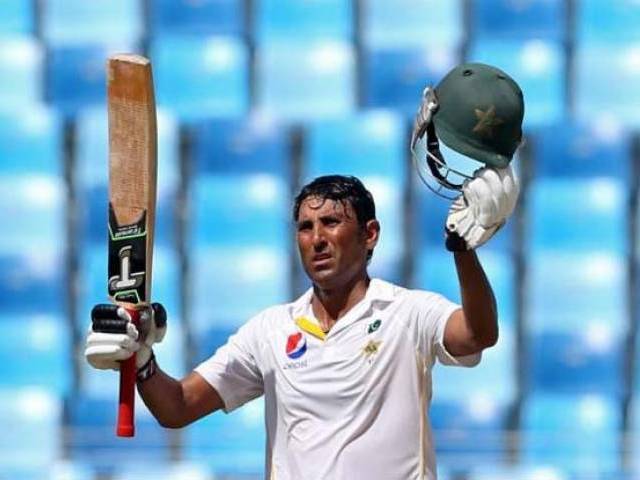 A Pakistan record of 9,116 Test runs at an average of 53.94 — 14th on the all-time list — and 31 Test hundreds — 10th on the all-time list — make Younus Khan a great of the game. After a lifetime of toil under the sun, in recent years, he has received rich accolades and the world has finally acknowledged his achievements. Younus is revered and respected by most in the cricket fraternity.

In the next nine months as he goes past his 39th birthday, Younus has the chance of conquering the final frontier for a sub-continent batsman, the chance of piling on runs and centuries at the home of cricket, England, and arguably the toughest place to bat in for an Asian batsman — Australia. In 15 previous Test innings in the two countries, Younus has managed only a single century. Surely, he needs to set the record straight. Seven Tests, seven opportunities — four in England, three in Australia — can catapult his status as a batting legend acknowledged in the same league as the Tendulkars, Laras and Pontings.

Younus was termed an ”institution” by former head coach Waqar Younis after his match-winning unbeaten 173 at Pallekele last year. The subsequent England series in the UAE was also full of the Younus bravado as he went past Javed Miandad’s Pakistan record of 8,832 Test runs against a strong bowling attack.Throughout the last two seasons, teammates, both young and old, wholeheartedly recognised his contributions as an elder brother, one who was ready to put an arm around their shoulders and rescue them whenever they endured a tough time.

But of late, Younus has developed a nauseating urge of getting under the skin of the PCB, the team management and his fans. Since late 2015, Younus appears to have become a man whose temperament fluctuates wildly in a matter of minutes. People close to him are surprised to see his edgy, irritating persona that infuriates all, as he gets angry on the strangest pretexts imaginable. Backed by a certain and often reckless section of the electronic media, Younus gate-crashed his way to the ODI team for the four-match England series last November, adamant that he would exit on his own terms in a format in which at best he has displayed only a shadow of his otherworldly Test numbers — an average of 31.24 in 265 ODIs.The whole ‘exit on his own terms’ drama lasted one short episode. Waqar had promised his seasoned campaigner a place in the playing-eleven, but the now short-fused Younus somehow felt unwelcome in the dressing room and called curtains on his rather inglorious ODI career after only a single reappearance. Not sure if the decision could be described as anything other than a truly selfish one since his exit caused an imbalance in the team, Pakistan never recovered and despite winning the last match of Younus’ career, surrendered the series 1-3.

Fast-forward to April 2016, Younus, the newly appointed adviser to PCB Chairman Shaharyar Khan, took over the reins of the Khyber-Pakhtunkhwa (K-P) team in the Pakistan Cup. But once again, the 50-over format brought to the fore the uglier side of Younus. His eccentricities were evident from the outset as he shouted and gesticulated wildly at erring teammates on the field, not even sparing under-19 rookies on even the slightest error. Team K-P remained extremely uneasy with his antics and all hell broke loose when Younus unleashed his fury on the umpires and match referee for their ‘incompetence’ at the end of the second game before abandoning the tournament the next day after he was fined for his behaviour by the match referee. A concerned Shaharyar Khan intervened to first block, before clearing the path of his adviser’s return in a matter of 24 hours following an apology from Younus for the outburst in response to the show cause notice issued to him. Shaharyar used his own discretionary power to bring back Younus, bypassing the due procedure in place for violations of such magnitude — abandoning his team, refusal to appear before the match referee and openly questioning umpiring decisions, a level three offence as per the disciplinary code. The grapevine has it that Shaharyar and company, for the umpteenth time, crumbled in the wake of the pressure exerted by the pro-Younus lobby amid fears that the temperamental batsman might quit the Test format too even before setting foot on English soil for the ‘redemption series’.

In the days ahead, the spineless PCB is likely to cop severe criticism for buckling under Younus’ tantrums without punishing him even once for his series of misdemeanours but more tragically the fear is that at the twilight of a stupendous career, the great batsman is busy shooting himself in the foot, causing irrevocable damage to his otherwise credible, clean and team man image. Younus’ fans yearn for the saner Younus to reappear and pile on the runs in England and Australia, the one who wears a million-dollar smile on his face and dismantles opposition bowlers, rather than the infuriating, short-tempered middle-aged character acting on the advice of his sensationalism-craving advisers apparently hell bent on ruining the end of a truly stellar Test career.

Fairy tale of a city