Says people will resist every move aimed to depriv­e them of develo­pment
By Our Correspondent
Published: May 2, 2016
Tweet Email 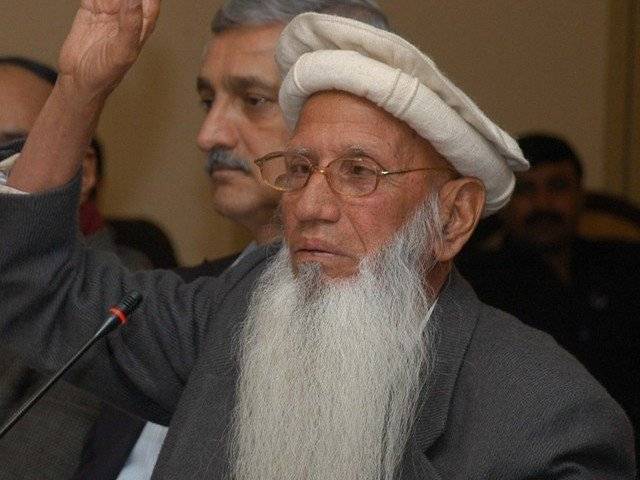 ABBOTABAD: Tehreek-e- Suba Hazara chief Sardar Baba Haider Zaman has threatened to organise a massive protest against the Khyber-Pakhtunkhwa government if it acts against the area’s economic interests.

He said the party would react if the government tries to table a resolution in the National Assembly against the inclusion of Hazara in the China-Pakistan Economic Corridor (CPEC).

He expressed these views while speaking to journalists at Hazara House on Sunday.

On April 27, Khattak had met a delegation of ministers and officials from Hazara and discussed if the roads planned for the area under CPEC would have all facilities planned for central route.

Haider Zaman pointed out, “We will observe a black day against such a resolution and would hold demonstrations.” Responding to a question, he said, “The nature of the protest would be decided at a later stage. It could be a demonstration or a civil disobedience movement.”

The TSHP leader added, “Despite being the biggest contributor of natural resources, Hazara Division was always ignored and preference was given to other districts.”

Haider Zaman maintained, “We will protect the rights of our people at every cost and will not allow the K-P government to hinder Hazara’s prosperity and development.”

He stated, “The K-P government should have taken the people of Hazara into confidence before planning to table a resolution against the CPEC.”

He warned the people of Hazara would resist every move aimed to deprive them of their constitutional rights to development.

Banking on guesswork? Killers of teenage girl burnt to death remain at large