Beijin­g will start constr­uction on a South China Sea islet as it seeks to projec­t its power in the disput­ed waters­
By AFP
Published: April 25, 2016
Tweet Email 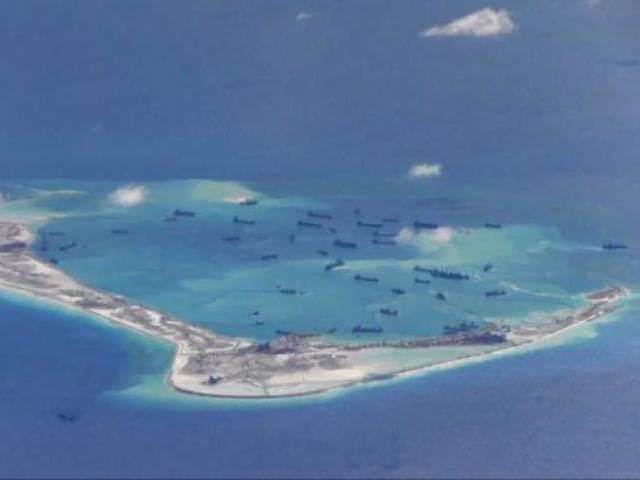 BEIJING: Beijing will start construction on a South China Sea islet within the Philippines’ claimed exclusive economic zone this year, as it seeks to project its power in the disputed waters, Hong Kong media reported Monday.

China will establish an outpost on Scarborough Shoal, 230 kilometres (143 miles) off the Philippine coast, the South China Morning Post newspaper cited an unnamed source close to the People’s Liberation Army as saying.

Beijing claims nearly all of the strategically vital sea, despite completing claims from several Southeast Asian neighbours, and in recent months has built contested reefs into artificial islands, some topped with airstrips.

Manila claims Scarborough Shoal, but says China took effective control of it in 2012, stationing patrol vessels in the area and shooing away Filipino fishermen, after a two-month stand-off with the Philippine Navy.

The SCMP cited the source as saying the outpost would allow Beijing to “further perfect” its air coverage across the South China Sea, suggesting it plans to build an airstrip.

The report comes ahead of an international tribunal ruling, expected within months, on a case brought by the Philippines over the South China Sea.

It also follows an announcement by the US and the Philippines that they would launch joint naval patrols in the sea.

The plans were likely to be accelerated in the light of the upcoming ruling from the Permanent Court of Arbitration at The Hague, the newspaper cited the source as saying.

“China should regain the initiative to do so because Washington is trying to contain Beijing by establishing a permanent military presence in the region,” it quoted the source as saying.

Washington has sailed ships close to islands claimed by Beijing, accusing China of militarising the South China Sea and deploying missiles in the area.

US, India to shore up maritime cooperation

Beijing says the South China Sea is an inherent part of its territory and admits building military-capable airstrips and deploying unspecified weapons on some of the islands, but insists US patrols have ramped up tensions.

As well as China, the Philippines, Vietnam, Malaysia, Brunei and Taiwan have claims to parts of the sea, which are home to some of the world’s most important shipping lanes and believed to sit atop vast oil reserves.