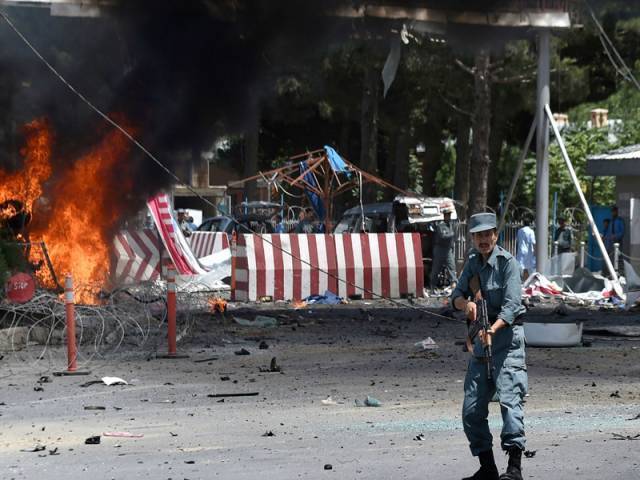 The Taliban-claimed attack on April 19 claimed 64 lives and injured 347 others. PHOTO: AFP

ISLAMABAD: Afghanistan has alleged that a recent deadly attack in Kabul this month was planned by the Haqqani network in Pakistan.

On April 19, Afghan Taliban-claimed attack against a security agency responsible for protecting senior government officials and VIPs, which killed 64 people and injured 347 others.

In a message to Afghan President Ashraf Ghani, Prime Minister Nawaz Sharif had condemned the heinous attack and called for coordinated approach to eliminate the menace of terrorism.

At least 13 dead in bombing north of Kabul

“Investigation is underway but the initial evidence suggests the attack was planned by the Haqqani Network with the help of foreign circles in Pakistan,” deputy spokesperson for Afghan President Dawa Khan Meenpal told Radio Azadi.

According to Meenpal, some foreign intelligence circles had helped the network [to plan the attack].

Preliminary investigation indicates it was a complicated attack and could not be carried out without the support of foreign intelligence support, he maintained.

The spokesperson went on to say that Pakistan had “always allowed its soil to be used by those who fight Afghan government.”

“Pakistan has failed to fulfill its promises with Afghanistan and has always given space to the enemies of the Afghan government and its people.”

“Addresses and sources of the foreign intelligence circles that are inimical to Afghans are known,” the spokesperson added.

Claiming responsibility for the attack, Taliban had said three militants took part in the attack and that it was part of the group’s spring offensive.

The attack raised questions about the capability of the US-Nato trained Afghan intelligence agents to thwart such huge attacks in high security zone.