17 people, includ­ing 14 member­s of the same family, had been charge­d with sodomy, extort­ion and blackm­ail in the case
By Reuters
Published: April 18, 2016
Tweet Email 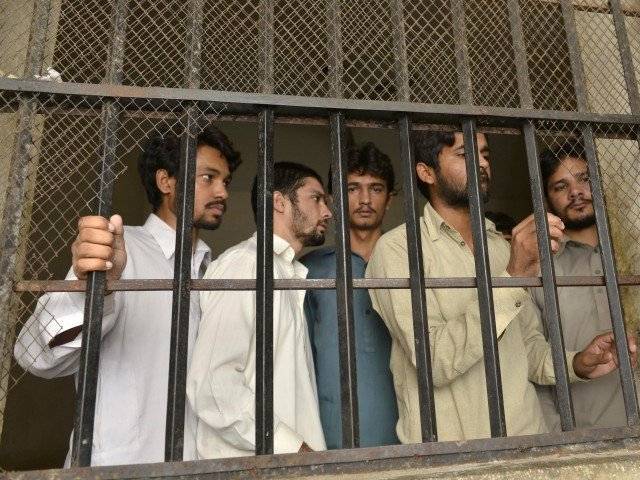 Arrested gang members of a sexual abuse scandal stand in the police lockup in Hussain Khanwala village, some 55 kms southwest of Lahore on August 9, 2015. PHOTO: AFP

LAHORE: A court on Monday sentenced two men to life imprisonment for their role in a paedophile ring accused of abusing dozens of children over many years in Punjab, their defence lawyer said.

The discovery of the paedophile ring last year shocked Pakistan and led to a rare sanctioning of police officers for negligence after dozens of families came forward to say their children had been abused and then blackmailed by members of a wealthy family.

Residents at the time alleged a prominent family in the village of Husain Khan Wala used guns, knives and axes to force children – some as young as five – to perform sex acts on video, which they sold or used to extort money from victims’ families.

Lawyer Adnan Liaqat said 17 people, including 14 members of the same family, had been charged with sodomy, extortion and blackmail in relation to the abuse of children.

“In one of those cases, two accused Haseem Amir and Faizan Majeed have been convicted and sentenced to life imprisonment by an anti-terrorism court today,” Liaqat told Reuters.

Officials occasionally use anti-terrorism courts to prosecute important cases as regular courts are perceived to be weak and wealthy suspects can bribe their way out of trouble.

Three men suspected of molesting, filming teenager in Mansehra still on the loose

Liaqat said Amir and Majeed were also fined Rs0.3 million ($2,865) for their role in the abuse, becoming the first people to be convicted in relation to the scandal. Amir is a member of the prominent family, while Majeed is his friend.

Families of the abused children have accused the police of negligence, saying they had raised alarm bells about the abuse but were ignored.

At least three police officers were removed from their posts over the scandal, a rare event in a nation where police officials are seldom sacked.