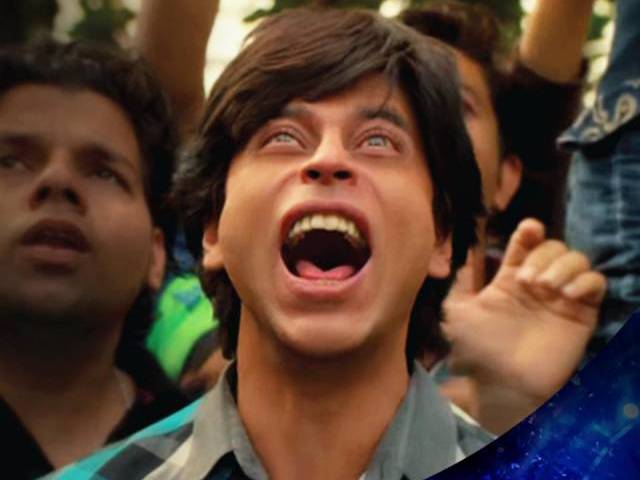 KARACHI: If you’re a Shah Rukh Khan fan, this piece isn’t meant for you because either you have watched the megastar’s latest venture already or have booked your tickets.

Recently, there was a lot of criticism following the release of Dilwale, all of which was primarily directed towards Shah Rukh, or, as he is fondly called, King Khan. Many said his career was over. Some were even ready to switch loyalties. Let’s just say it wasn’t the best time to be the biggest movie star in the world or his fan.

Here are five reasons why you can’t afford to miss Fan: Although Shah Rukh has played double roles in the past, Fan is certainly an exception because Gaurav and Aryan aren’t twins separated at birth. Both the characters look alike but are not identical and that is where the movie’s greatest strength lies.

The fact that Gaurav doesn’t look identical to Aryan — the fictional character — and Shah Rukh — the real-life star — makes it easier for the audience to see him as a separate and independent character and gives authenticity to the plot.

Shah Rukh has nailed — NAILED — the walk, the talk, the mannerisms of a 20-something-year-old Delhi boy. Sure, the make-up and VFX have a lot to do with the way he looks but only an artist of his caliber could have pulled off the act with such aplomb. Reviews are in: Is ‘Fan’ SRK’s best movie yet?

In Fan, you get to see Shah Rukh in three forms not two. Let that thought sink in for a while and try to understand what that means. First, there’s Aryan Khanna. Although he shares many traits with the real life Shah Rukh, it still is a fictional character. There are sequences where you see glimpses of Shah Rukh in Aryan; for example the footage of Shah Rukh waving to crowds at his residence, Mannat, on his actual birthday.

But there are also scenes where you see Aryan helpless, sad and even depressed — private moments which Shah Rukh doesn’t share with the whole world. And then there are action scenes, which most likely belong on only film — such as sequences where he is jumping off buildings and riding a motorbike on the streets of Croatia.

So, in essence, Aryan is a mix of two characters — only loosely based on the real star. And then there’s Gaurav, who is nothing like Aryan or Shah Rukh. Three in the price of one. A real treat, don’t you think? There is not a single song in the movie. Even the immensely popular number, Jabra Fan, hasn’t been featured in the film. When was the last time you watched a Shah Rukh Khan movie that didn’t have him shaking a leg in the picturesque locales of Switzerland or some other exotic part of the world?

That’s right. Fan is Shah Rukh’s first film to not feature a dance or romantic number. That alone should be proof enough that he has not just reinvented himself as an actor, but this bold step by him to feature in an atypical Bollywood film will greatly encourage young actors and filmmakers to be experimental. There’s a sequence in the film where Gaurav tries to mimick Aryan. Again, just let this thought sink in and try to imagine what this would be like.

Take your time. No rush.

Doesn’t matter though, because unless you’ve seen that scene, you can’t possibly imagine how unbelievably brilliant that is. Have you ever seen an actor mimick a fictional character based on his real-life persona? Sort of like a character-‘inception’. Good for you, if you have. If you haven’t, you must watch Fan. There’s no denying that every person is a fan of someone or something. Whether it’s a football player, a cricketer, a Hollywood celebrity on Instagram or Twitter or Facebook; everyone looks up to, admires or is inspired by someone. Ever wonder what kind of fan your favourite sportsperson or actor or musician would be?

It’s hard to imagine a star to know what it feels like to queue for hours just to catch a glimpse of someone. Or how unforgettable it is to meet, get an autograph or a selfie with their favourite personality for just a moment.

Somehow, Shah Rukh knows. The expression on Gaurav’s face — when he sees Aryan for the first time ever in the flesh — is hard to explain. It’s an emotion that those of us, who have experienced meeting our favourite star, can relate to.

How can someone, who himself is a real-life star — perhaps one of the biggest in the world — get it right?

May the King live on forever.