First batch of Afghan army cadets passes out from PMA

First batch of Afghan army cadets passes out from PMA

This is the first ever group of Afghan Nation­al Army cadets who attend­ed a course at Pakist­an Milita­ry Academ­y
By Tahir Khan
Published: April 16, 2016
Tweet Email 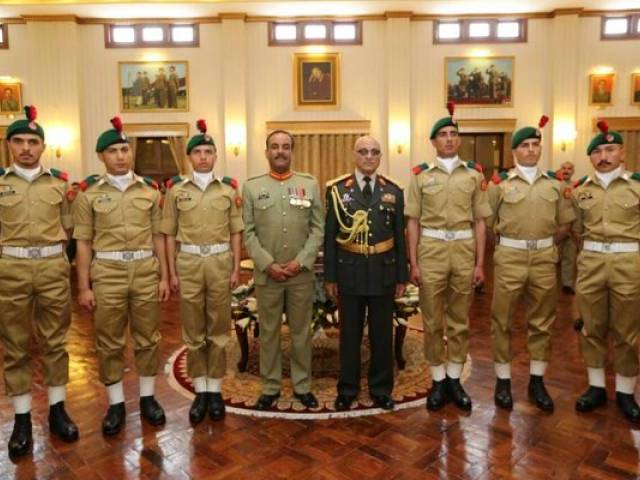 Six Afghan army cadets, who had arrived at PMA in February last year, passed out from PMA along with the 134th PMA Long Course, 52nd Integrated Course and 6th Mujahid Course.

This is the first ever group of Afghan National Army cadets to attend a course at the PMA. President Mamnoon Hussain and Chief of Army Staff General Raheel Sharif were also present at the passing out ceremony.

In 2014, Afghanistan President Ashraf Ghani had sent the cadets to Pakistan after General Raheel offered training courses at military academies in Pakistan for Afghan security forces during his maiden visit to Kabul. According to sources in military, besides the Afghan army cadets, six cadets from Palestine and one from Bahrain also passed out from PMA.

Afghan cadets are set to join their security forces back home at a time when the Afghan Taliban have announced their annual Spring Offensive.

Afghan officials and Taliban have confirmed severe fighting close to the strategic northern city of Kunduz.