Carter's trip to the warshi­p is the latest move by the United States in the hotly contes­ted waters­
By AFP
Published: April 15, 2016
Tweet Email 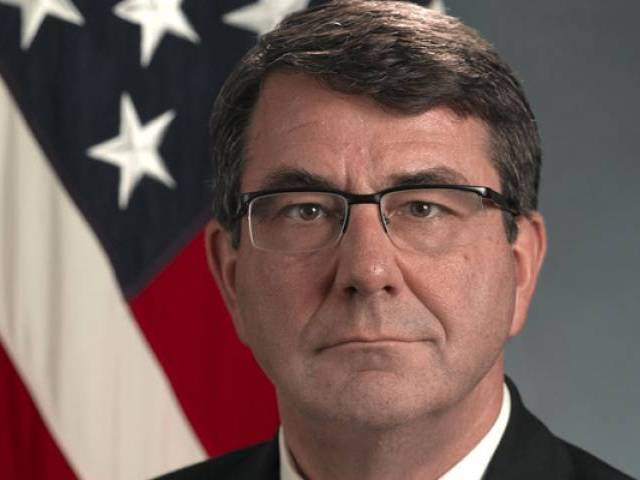 MANILA: US Defence Secretary Ashton Carter said he would visit a warship close to flashpoint waters of the South China Sea on Friday, as Beijing reacted defiantly to an American military build-up in the area.

“Later today, I will visit the aircraft carrier USS John C. Stennis, sailing in the South China Sea, after some of its sailors and Marines participated with you in Balikatan,” Carter said in Manila, referring to annual war games with the Philippines that ended Friday.

Carter’s trip to the warship is the latest move by the United States to show it is committed to maintaining security in the hotly contested waters, where China has built artificial islands on islets and reefs close to the Philippines.

China claims nearly all of the strategically vital sea, even waters close to its Southeast Asian neighbours, and has in recent years built the islands in an effort to assert what it insists are its sovereign rights.

The Philippines, Vietnam, Malaysia, Brunei and Taiwan also have overlapping claims to parts of the sea, which is home to some of the world’s most important shipping lanes and is believed to sit atop vast oil reserves.

China has constructed the islands on reefs in the Spratlys archipelago, which are close to the Philippines and Malaysia, as well as airstrips capable of accommodating military aircraft.

Carter announced on Thursday that the US had launched joint naval patrols with the Philippines in the South China Sea, as he spoke of growing concern about China’s “land reclamation” and “militarisation” of the region.

He also said the US would deploy hundreds of troops, as well as five warplanes, to the Philippines.

China reacted defiantly to the announcement, with its defence ministry warning the military would protect the nation’s territory.

On Friday, Carter emphasised the US would back up the Philippines and other allies in the region.

“At a time of change in this dynamic region, and democratic transitions in the Philippines and the United States, we will continue to stand shoulder-to-shoulder,” Carter said at the closing ceremony for the war games, which involved about 9,000 soldiers.

“We will continue to stand up for our safety and freedoms, for those of our friends and allies, and for the values, principles, and rules-based order that has benefited so many for so long.”

Carter also highlighted the presence of soldiers from Australia and Japan for the Balikatan war games this year, emphasising that the two key regional players had also expressed concerns over China’s expansion in the South China Sea.

“I am pleased to see so many nations interested in working together to promote stability and security in the Asia-Pacific,” he said.

Philippine and American officials would not disclose exactly where the Stennis was sailing on Friday.

However Carter was due to make only a short flight to the carrier from a military base on the southwestern Philippine island of Palawan, which is the closest landmass to the Spratlys.

A US official travelling with Carter told AFP the Stennis was in Philippine-claimed waters.

The 275 American troops and nine aircraft that Carter said would stay in the Philippines following the Balikatan war games are the first major deployments under a bilateral defence pact finalised in January.

The pact allows US forces to rotate soldiers and military hardware through the Philippines, an important part of American efforts to expand its military presence throughout the Asia-Pacific.

US forces will initially have access to five Filipino military bases, including two close to the hotspot areas of the South China Sea.

Philippine Defence Secretary Voltaire Gazmin on Thursday said he hoped the US efforts would “deter uncalled-for action by the Chinese”.