US defenc­e secret­ary is to fly to Philip­pines to observ­e live-firing of artill­ery and visit US Navy ships taking part
By AFP
Published: April 4, 2016
Tweet Email 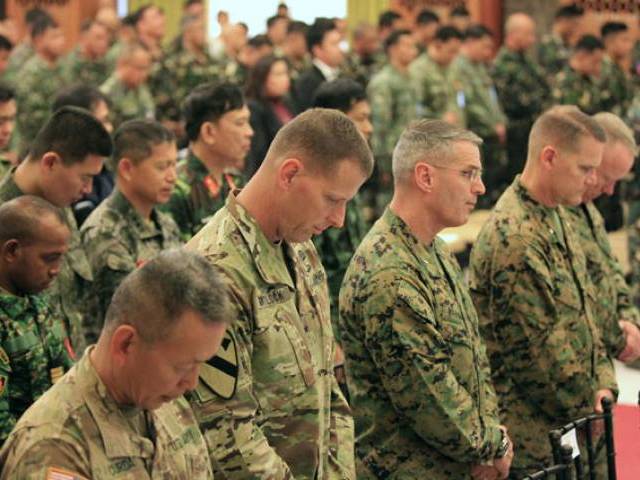 US troops pause in prayers during the opening ceremony of the 2016 Balikatan military exercises at the Armed Forces of the Philippines headquarters in Camp Aguinaldo, Quezon city, metro Manila April 4, 2016. PHOTO: REUTERS

The official Xinhua news agency gave the warning as Manila and Washington launched the 11-day Balikatan (Shoulder-to-Shoulder) exercises with a low-key opening ceremony in Manila.

US Defence Secretary Ash Carter is to fly to the Philippines next week to observe live-firing of artillery and visit US Navy ships taking part.

Some 5,000 US troops are taking part along with nearly 4,000 Philippine soldiers and 80 from Australia. “The… exercises caps Manila’s recent attempts to involve outsiders in (a) regional row,” China’s official news agency Xinhua said in a commentary.

It cited Japan, which sent a submarine on a visit to the Philippines last weekend, and Australia. “However, a provocation so fear-mongering and untimely as such is likely to boomerang on the initiators,” Xinhua added.

“A big country with vital interests in Asia, the United States should first clarify the targets of its Pivot to Asia strategy, which so far has featured no more than unscrupulous inconsistency between fear-mongering deeds and peace-loving words.”

China lays claim to almost all of the South China Sea, despite partial counter-claims by Brunei, Malaysia, Taiwan, Vietnam and the Philippines.

In recent years it has built major structures including radar systems and airstrips over reclaimed reefs and outcrops, sparking international concern it could impose military controls over the entire area.

The US does not take sides in the territorial disputes but has asserted the importance of keeping sea and air routes open. It has sent US bombers and warships on patrol close to the Chinese construction activity in recent months, infuriating Beijing.

Lieutenant-General John Toolan, commander of US Marine Corps forces in the Pacific, told reporters in Manila the exercises would help the allies improve maritime security and maintain regional stability.

“Our alliance is strong. The United States is committed to this relationship and these are not empty words…. peace in Southeast Asia depends on our cooperation,” Toolan added.

The exercises come ahead of a decision this year by a United Nations-backed tribunal on a legal challenge by Manila to China’s territorial claims.

The Philippines is also preparing to host US troops at five bases under a defence pact born out of US President Barack Obama’s plan to reassert American influence in the Pacific.