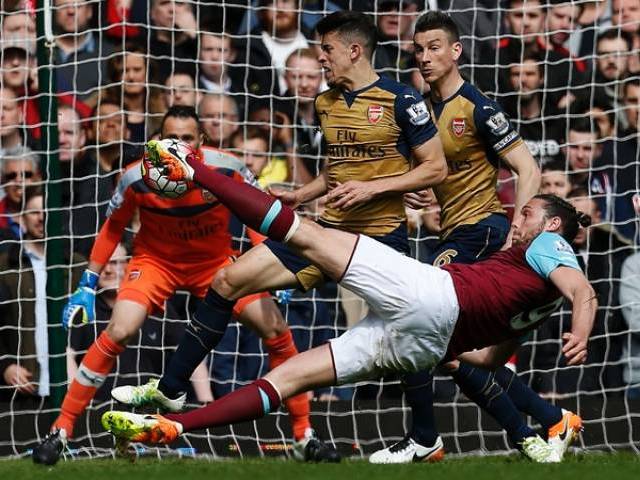 Andy Carroll shoots to score his team's second goal against Arsenal at The Boleyn Ground in Upton Park, London on April 9, 2016. PHOTO: AFP

LONDON: Arsenal manager Arsene Wenger conceded it will be “difficult” to win the Premier League after his side squandered more points in an entertaining 3-3 draw at West Ham United.

The north Londoners are now 10 points behind leaders Leicester City after Saturday’s draw, in which Laurent Koscielny equalised after Andy Carroll’s hat-trick had seen West Ham come from 2-0 down to lead.

“Do we still have an opportunity to win the title? I don’t know,” said Wenger. “We made it more difficult today. We are third in the league with 59 points and it is not where we want to be.

“It is difficult now to be champions, but we have to keep going because you never know what can happen. There are also clubs chasing us, so it is important to finish as high as we can.

“But I’m not here after the game to blame the players. We are disappointed to concede three goals. Particularly after 2-1. Overall, it’s a shame.” Arsenal were in control of the game as they led 2-0 after 35 minutes, with 19-year-old Nigerian starlet Alex Iwobi setting up goals for Mesut Ozil and Alexis Sanchez.

But then Carroll, making a rare start for West Ham, produced a hat-trick in the space of just eight minutes.

He then met Michail Antonio’s 52nd-minute cross with a trademark back-post header to set West Ham on course for victory, only for Koscielny to exploit poor defending by equalising 20 minutes from the end.

Wenger was upset that Carroll had not seen red before his match-turning contribution, after he was only booked for a late challenge on Koscielny and then caught Gabriel with his elbow.

“He was lucky,” said Wenger. “He could have been sent off, but even if he had, we should still have defended better against headers. We have been punished for a weakness that we have had this season.

“We’ve shown resilience and spirit to come back to 3-3. In the last 20 minutes it could have gone both ways, but I’m disappointed we didn’t have an answer to Andy Carroll.

“I didn’t expect him to start, though, because he has not played the last five or six games.” West Ham manager Slaven Bilic claimed afterwards that Carroll is better in the air than any player in the world.

“Andy Carroll has everything,” said the Croatian. “It’s impossible to stop him. His work rate — watch how many times he tried to get the ball off them. He was keeping the ball, laying it off.

“And with his heading, he’s maybe the best in the world. But he has to stay away from those injuries. He’s professional, but he’s got to be totally dedicated to his career and football.

“Now Andy is fit and we hope he will stay fit. There aren’t many players capable of doing what he is doing.”

The draw represented a blow to West Ham’s hopes of Champions League qualification and they finished the day five points below Manchester City, who occupy the fourth and final qualifying berth.

But Bilic was heartened by the manner in which his side battled back from two goals down.

“I am so proud of my team to come back like that before half-time and then to be better than them in the second half,” he said.

“I’m proud of everything. We were spectacular. But the only thing I’m not happy about is the result. Why? This is a blow. We’d done enough (to win).