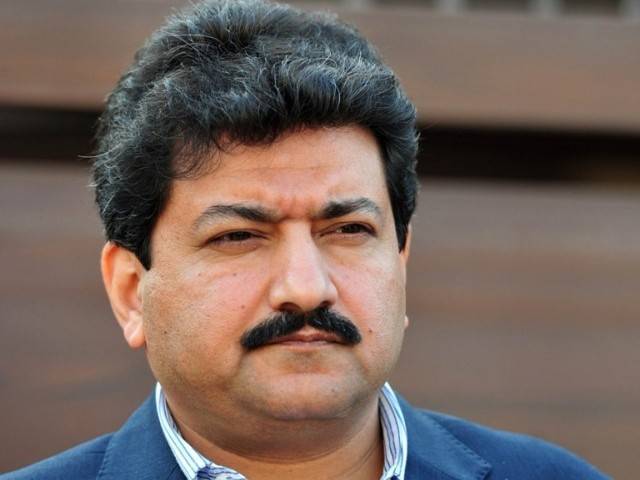 An inquiry commission, led by Chief Justice of Pakistan Anwar Zaheer Jamali, has ruled out the involvement of the Inter-Services Intelligence (ISI) in the attack on veteran journalist Hamid Mir two years ago.

In a 41-page report, the three-judge commission, which also includes justices Ejaz Afzal Khan and Iqbal Hameedur Rehman, observed that allegations the country’s premier intelligence agency possible involvment in the attack were based on ‘suspicions, assumptions or apprehensions’.

Mir was critically injured on April 19, 2014, when unknown suspects opened fire on his car along Shara-e-Faisal. The attack took place right after he had arrived at Karachi airport. The incident was widely covered by both national and international media.

But Geo TV — for whom Mir worked as an anchor — launched a propaganda campaign against the ISI. For several hours, the network aired reports accusing the agency of involvement in the attack while prominently flashing the photograph of then ISI director general Lt-Gen (retd) Zaheerul Islam.

After investigating the incident for nine months, the inquiry commission drafted a report which stated that, prima facie, there was a tug of war among some journalists and the ISI, because some media persons had told the commission that the spy agency was unhappy with their reporting.

The report also observed that there was a complete failure on the part of law enforcement agencies to investigate the attack. It mentioned that CCTV footage viewed during in-camera proceedings of the commission clearly showed two individuals at the Karachi airport behaving in a suspicious manner at the time of Mir’s arrival. Despite this, law enforcement agencies were unable to catch actual culprits, it added.

The report said that even though officials of the ISI and Inter-Services Public Relations (ISPR) completely dissociated the spy agency from the incident, some members of the print and electronic media fraternity still pointed their fingers towards it. “We cannot lose sight of an important aspect of the matter – the interaction of media persons with agencies in the course of their professional duties. In the process, there are concerns raised on behalf of the agencies vis-à-vis reporting on sensitive issues of national security. Such concerns have their genesis in various articles of the Constitution, including articles 5 and 10(7),” the report stated.

I am being ‘advised’ to leave Pakistan: Hamid Mir

It added that the right to freedom of speech is also subject to reasonable restrictions imposed, inter alia, in the interest of integrity, security and defence of Pakistan or any part thereof, friendly relations with foreign states and public orders. “The mad race for breaking news and getting a lead makes things from bad to worse. Falsehood is propagated brazen-facedly and truth obliterated or, worse, confounded.”

The commission observed that the apparent conflict between media persons and agencies calls for a rational resolution so as to bring reconciliation, harmony and balance in the working of both sides.

It further stated that an appropriate mechanism is required to be put in place to deal with such complaints of journalists so that the individuals concerned are dealt with according to the law.

The report also directed attention at the recommendations of the commission probing the death of late journalist Saleem Shehzad. “We have gone through those recommendations and would reiterate the same. In this behalf, the recommendations made by a Special Working Group of the Pakistan Coalition on Media Safety to investigate the attacks against the media persons, namely provision for the appointment of a special prosecutor, legal aid unit, family counseling unit and primary case investigation unit, are also worth consideration at the appropriate level,” it said.

The commission regretted that the federal government did not take any step over those recommendations.

TV licence was suspended for 15 days

After Geo TV launched a slur campaign against the ISI following the attack on Hamid Mir, the Pakistan Electronic Media Regulatory Authority (Pemra) had suspended on June 6, 2014 the network’s licence for 15 days and imposed on it a fine of Rs10 million. The authority had also warned the channel that it would cancel its licence if it repeated such a mistake in the future.

I had threats from state and non-state actors: Hamid Mir

Subsequently, the defence ministry filed a reference with Pemra, requesting it to cancel the network’s license. In its reference, the ministry said that Geo and Jang Group had started a baseless campaign against ISI and then chief of the agency, Lt-Gen (retd) Zaheerul Islam, and that it was not the first time they had targeted the national security institutions.

The reference also said that Geo and Jang Group had engaged in irresponsible reporting following the murders of American journalist Daniel Pearl, Pakistani journalist Wali Babar and Supreme Court officer Hammad, and the death of the parents of a senior top court judge. “The recent propaganda campaign by Geo provided an opportunity to anti-Pakistan forces to defame the country,” the reference stated.