62 turtles, 55 of them dead, handed over to wildlife dept

62 turtles, 55 of them dead, handed over to wildlife dept

Only seven turtle­s surviv­ed and the rest died of suffoc­ation
By Our Correspondent
Published: April 8, 2016
Tweet Email 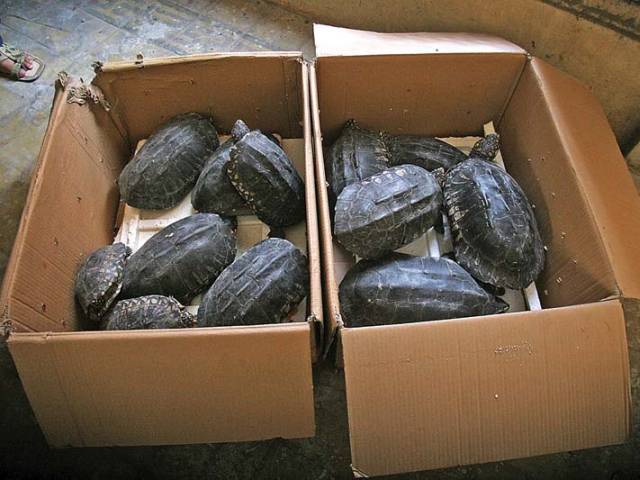 Sixty-two endangered turtles were being smuggled to Malaysia when they were caught and handed over to the Sindh wildlife department. Only seven have survived and they will be released in the Haleji Lake. PHOTO: ATHAR KHAN/EXPRESS

KARACHI: As many as 62 turtles of an endangered species were handed over to the Sindh wildlife department on Thursday night.

The turtles contained in boxes wrapped with tape were recovered by the crime branch police of Jamshed Town.

According to Adnan Mehmood, the incharge of marine conservation at the wildlife department, only seven turtles could survive as the rest died of suffocation. “They were wrapped in such a way that they could not breathe,” he said. He elaborated that scotch tape was tightly wrapped around the sealed boxes.

Mehmood added that these turtles, worth Rs10 million in the international market, were being smuggled to Malaysia, where they are used in the pharmaceutical industry. He said that these black-spotted turtles are rare in the country. When asked if anyone involved was arrested, Mehmood replied that, according to the police, the culprits ran away but they have clues about their involvement and will get information about them very soon.

He said that his department is keen about stopping the smuggling of endangered species. He added that we need to create public awareness about how significant these animals are for our ecological system. He said the remaining turtles will be released in the Haleji Lake.